Do not stay here. We were delayed so we didn’t need access earlier than the 3:00 PM check in time. The host is an appalling communicator. On the day before the booking I sent two messages four hours apart requesting clarification of address and check in procedure. I told the host that we would not have wifi while in transit on the day of arrival. The host sent a reply overnight. He agreed to allow us to store our luggage if we arrived early.

Unfortunately, we were unavoidably delayed so we didn’t need access to the apartment earlier than the check in time. He claimed that this inconvenienced him, and it went downhill from there. In his message, written in perfect English, he sent an incorrect address – wrong house number, wrong floor, wrong apartment number and wrong access code. The building couldn’t be located using Airbnb maps’ link on the listing, so we had to guess the house number from the photo on the listing.

Our friend arrived in Madrid three hours before us. We had planned to meet at the apartment, but he couldn’t get in because of the wrong information, nor could he contact the host for clarification; I was the only guest who had access to the Airbnb messaging system. He had travelled from the US and had to wait outside the apartment with his luggage until we finally arrived. On arrival, my daughter and I tried to open the apartment using the instructions provided then had to find wifi in the local area to locate our friend and get the correct address from the host.

The host and his sister came to let us in. They both entered the apartment and demanded that I speak in Spanish (“you’re in Spain, speak Spanish”), even though he had listed that he speaks English, and all previous communication was in English. He had a heated discussion in Spanish with our NYC friend and the host then ordered us to leave (in English). I refused to leave as I’d paid for the accommodation. I told him that if he provides a full refund we would leave, but he refused to accept that.

He then came within 10 cm of me, pointing in my face and shouting abuse. I told him several times to back off. At that point we realised that this was getting very serious and that we needed to comply or alternatively to call police to intervene. He did not apologise for his poor communication, instead he claimed he had been an exemplary host by offering for us to store our luggage. We thanked him for that and he and his sister left. His sister spoke English, but she did not intervene on our behalf. Instead she allowed her brother to abuse us. I was very shaken and concerned for our safety. We vacated the premises very early the next day, to avoid any further abuse. 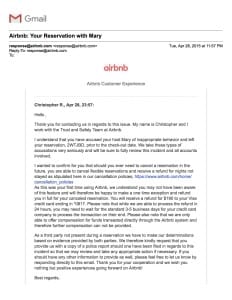 We requested the 19th to 23rd of July for 16 people. The booking (and the money) was accepted. After confirmation, the host messaged that they had mistakenly double booked the property. The host offered us instead a choice of three sets of dates. We contacted everyone in our party to find which dates would suit them. We selected one of the dates (24th – 29th July). As there was an extra night and the property was larger, we asked for confirmation that the price already paid would be honoured. The host confirmed that the price would remain the same and confirmed the booking. We made travel arrangements (not cheap). After all the confirmations, the host said that the property would not be available on the first night – the 24th of July. AirBnB let the host cancel the reservation – without any repercussions – despite the host messing around with us twice! The accommodation looks amazing but don’t expect your booking to be honoured. Proceed with extreme caution – no matter how many are in your party!

My sister and I booked Airbnb accommodation in Granada. The position of the accommodation was superb, down a short alley way and you were at the base of the Alhambra. Perfect for a couple of days which would include visiting the Alhambra, gazing at the Alhambra and photographing the Alhambra. The accommodation was basic at best. Claimed to sleep four – but where? The two windows which opened to the alley way were the only source of natural light but neither had a curtain, we hung sarongs to provide some privacy as the alternative, to close the shutters, meant that we felt like we were living underground. The gas stove and hot water did not work so we emailed the hosts. At 2pm, on day 2, they arrived to rectify. I am a coffee fanatic and carry my own coffee with me. Once the stove problem had been rectified I looked forward to a decent coffee. But their coffee maker did not work. Eek! The hot water continued to go off until the end of our stay and we continued to light the gas every time we needed a shower. Now, this is what happened, so this is what I reported in my review and this is when the abuse started. Airbnb encourages guests to be honest but where is the protection from the abuse that may follow?? I am very suspicious of reviews and “verified” photos. It is patently obvious that photos lie and reviewers are telling less than the truth. We rented the “magical” place in granada based on photos and reviews. The photos turned a sow’s ear into a silk purse and the reviews were generally glowing …. How come all those visitor experiences were so much better than ours? It’s an Airbnb mystery!