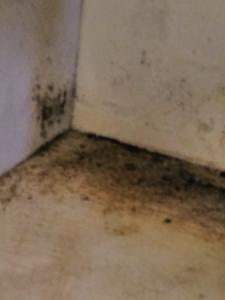 The arrangement at our Airbnb was of the kind where you let yourself in. This means that there is no one on the premises to talk to, and if something is wrong, there is no one who can set it right. Although we paid for two people, the apartment was set up for only one. There was a solitary towel in the bathroom and one on the floor, and bedding for only one bed. The owner did not answer the phone and communicates only by texting, so there was no way of remedying any problem in real time.

Although this was supposed to have been a non-smoking apartment, the air was stale and it was reeking of cigarette smoke. The apartment was superficially cleaned. The floor was not quite washed (there were unwashed spots), there was dust on some furniture, and there was junk behind appliances in the kitchen. There were fruit flies in the kitchen and the living room.

Although it was advertised as an air-conditioned apartment, I was not able to find any air conditioning (only a floor fan). This was a problem because the house faces a major traffic artery and it is impossible to keep the window open because the soundproofing is poor, so there is continuous traffic noise and noise from the neighbors, especially from upstairs. The area under the sink was all rotten, with mildew on the floor and the pipes, and as a result, the garbage can was left outside the cabinet, open, and without a lid.

In general (unrelated to this particular apartment), I think that properties where guests let themselves in without meeting the owner should be advertised as such. I would not have taken an apartment if I knew that there was no one on the premises to talk to. If there had been, I would immediately have declined this place, if only because of the fact that it had been smoked in and the area under the sink is rotten and mildewed, which is a health hazard for people with allergies.

I was charged $45.16 for the second person. After a lengthy correspondence with Airbnb, I found that the cost of an additional guest for two nights should be $22. I requested a refund, since the place was set for one. The “superhosts” refused. I think these people are beyond belief: dishonest and greedy, they both overcharged and did not deliver the service.

Finally, Airbnb (hopefully) issued a refund of $30 (why this particular amount?). I haven’t seen the money yet, as it takes them up to 15 business days. A normal service provider should take responsibility, issue a refund, and then solve the problems with the hosts. Airbnb… never again!