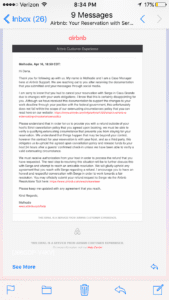 I travel quite a bit for my job. Someone told me about Airbnb. I checked it out, then used it for the first time in Pennsylvania. The host and the house worked out great. I thought Airbnb would be perfect to use because of the travel required for my job. I was wrong about that. I was scheduled to be in Casa Grande, Arizona on a Thursday. I contacted my host Tuesday night before my Thursday arrival to book after asking him multiple questions. I thought this place was perfect for my ten-day to a month stay. The next morning I received a phone call from my boss stating we had an emergency; we were going to the east coast instead of Arizona. I immediately contacted my host. Oddly enough, my host wouldn’t respond to Airbnb messages, phone calls, or text messages. So, I went on the Airbnb app to cancel. That’s when I discovered the host has a strict cancellation policy; I wouldn’t receive my full refund of $685 – I would only receive a refund of $178.

I called Airbnb. The gentleman to whom I spoke on the phone was hard to understand with his thick accent. He did explain to me he could do nothing to help. The host I rented from has a strict cancellation policy (which basically means the host can do whatever he wants with your money) and there’s nothing Airbnb can do. I didn’t accept what he was telling me. I couldn’t believe a company this big would allow someone to keep my money, when I called to cancel less than 24 hours after I made the reservation. Even airlines let you cancel within 24 hours of a reservation. The guy on the phone said he would escalate my complaint to a case manager. Another 24 hours passed and no one contacted me: not the host, not my case manager, no one.

I took matters into my own hands: I sent out 10-12 tweets while tagging the CEO of Airbnb in every tweet. Eventually someone contacted me from Airbnb. About 36 hours after my original complaint, the case manager told me he could help. All I had to do was send in a document on letterhead explaining what my extenuating circumstance were; my time frame was 48 hours. I had my boss fill out a letter. I also showed how my company is contracted by the government, and presented W-2’s to prove where I worked. I emailed Airbnb five times, and in every email I asked for someone to verify they had received it. Of course, no one called – I had to call and ask the day of the deadline.

The case manager sent me an email stating my claim had been denied. Apparently, the government I subcontract for isn’t the same government they were talking about in their rules for extenuating circumstance. I sent an email back and received no response. Then I started tweeting again. I have posted as many stories on Twitter as I can to warn others not to use Airbnb. Their customer service is obsolete. The company does not look out for their guests. This company is a great concept but if something goes wrong don’t expect Airbnb customer service to help you. I’ve read stories way worse than mine. I want to share my story because everyone needs to know how horrible this company is; if problems go south on your trip this company will not help you. If you cancel, guests can’t even warn others about any terrible mishaps.