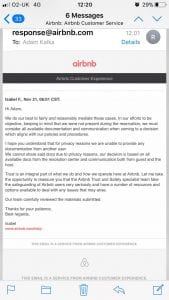 My partner and I decided to go for a quiet week away in the south of France. While at an Airbnb there, the apartment was okay, but there were a few issues such as a horrible smell coming from the downstairs bathroom whenever you used the upstairs shower room, the garden not being looked after, and no glasses to drink out of. Whilst on our stay we were approached by two men trying to push us into buying drugs. Our real problems started when we arrived home. Our host demanded €250 (more that what we’d paid for our stay) for a long list of things we’d supposedly broken. We were accused of burning tiles in the bathroom (not sure how we could possibly do this) and burning holes in the sofa with cigarette butts (neither of us smoke). The pictures the host provided literally showed no damage to anything she was claiming for. We took the issue to the resolution centre where they decided to get rid of all her other accusations apart from one for a broken sofa leg. They wanted £65. Not only did we not break this, when I asked for evidence of it being broken and for a receipt to prove the cost, they told me they couldn’t due to “privacy reasons”. Airbnb expected me to trust them yet now I am being charged for something that I not only didn’t break but for which they can’t even provide evidence. They have now taken this money out of my account without due cause and I will be taking this matter further.