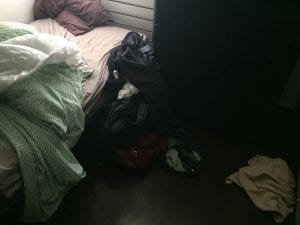 My host’s name was Vince. He lived at a house near Venice Beach in LA. While listing his property, he posted a different address; the real house was much farther from Venice Beach than the address posted. I would like to say the following to him. When I first passed this message along to Vince, he didn’t recognize me as a guest and I felt ignored. With this evidence, I would like to thoroughly clarify the Airbnb messages we exchanged.

Upon arrival, I noticed right away how your listing misrepresented the property. It was unsanitary, to say the least. Your advertisement made me falsely believe that I was going to share a secure and clean room with 4~6 people, while in reality there were closer to 35 people on the entire premises and the conditions were extremely unsanitary. I felt very uncomfortable and felt the urge to cancel my reservation right away, but decided to give it a couple of days since your rates were affordable. However, this morning, I was extremely shocked to find out that someone had stolen my leather jacket, which was kept securely in the closet in my room. It is one thing to stay in a place that has been misrepresented and unsanitary for its affordability, but it is absolutely intolerable to stay at a place where security is at concern.

I doubt he even lived in the house. He said there were four hosts, but I didn’t know who were the hosts and who were the guests. When I asked for a refund, Vince suggested that I could stay longer if I worked on the house. I was skeptical about his management system as a guest. I cannot believe people who call themselves hosts anymore. There’s just too much uncertainty using Airbnb.