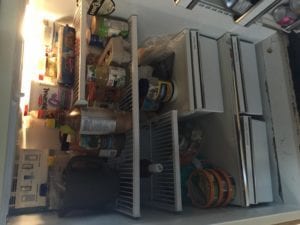 My girlfriends and I wanted to book a weekend away where we could relax and have fun. Being from different cities, we opted for a city in between our home towns. I found a ‘cottage’ on Airbnb with a hot tub overlooking a waterfall. It sounded perfect, and looked like what we had in mind. When we arrived, the long driveway was littered with an abandoned school bus, organ, and RV. Outside the cottage, chandeliers hung from the trees, and the waterfall turned out to be a foam-filled pond by a treatment plant of some kind. Inside, the floors were dirty. A dish of bacon grease sat on the stove. The fridge and freezer were so full of the owner’s food there was no room for ours – not that we wanted to cook in that kitchen. His hiking boots were hanging up over the counter and bowls. A vase of dead roses in brown water sat on the table.

In my room, the sheets were very stained. Rather than the open, tidy space shown in the posting photo, there was a rack of his clothes, and a half-full laundry bin at the foot of the bed. There were bathrobes to wear to the hot tub, but they were caked with grime. When we went out to use the hot tub, we discovered that the water from the pond left scum all around the tub. My friends started calling it the serial killer cabin: it was so gross and creepy, and they actually barricaded the door at night in case the host tried to get in. The next morning when I got in the shower, I discovered five used bars of soap, as well as his other toiletries. The wifi he said he had was actually only available on his iPad. When I opened it to try using it, his personal email was open. I wasn’t comfortable with that, so turned it off and had no internet access. This was obviously his residence, and he vacated it for the weekend without cleaning or tidying. I don’t think my girlfriend will let me book our weekend getaways anymore.