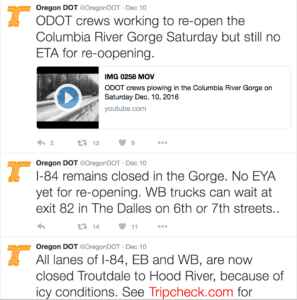 My partner and I booked with our host, Lindsay, over a month in advance for the weekend of December 10th-11th as I had a pop-up market in the area. Everything seemed fine; she had 4-star reviews and her strict cancellation policy was no problem since we had no plans to cancel. We live about an hour drive from Hood River, and at the last minute there was a winter storm warning in effect. A few hours before we were supposed to leave, the highway between us and the host was shut down and remained closed due to snow and ice for the entire weekend, preventing us from making the trip. The host had a ‘strict cancellation policy’ which makes sense to insure against last-minute cancellations, but our case falls under Airbnb’s extenuating circumstances policy as described on their website. We were physically unable to make it despite our best efforts and intentions.

Regardless, Lindsay offered us only a 50% refund and a credit for a night’s stay. We felt this was super shady and did not want a credit for a night’s stay, since this was to be a business trip and we have no plans to visit Hood River again in the near future. We requested a refund for the full amount. She refused, stating she could have gotten other guests (she couldn’t have, the roads were all closed and there were travel restrictions). We have escalated the claim and are now waiting for Airbnb to make a decision. We’re unable to leave her a review since the stay was cancelled, so we urge you never to book with “Lindsay’s Charming Guest House in Hood River.” We might have chosen to stay with her next time we visited, but due to her dishonesty and shady behavior will be urging everyone we know to avoid this listing.