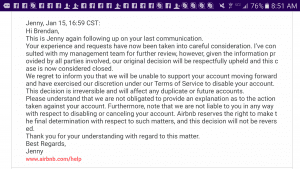 I stayed in Rio de Janeiro last summer. My host, Carolina, seemed nice enough. My boyfriend and I rented the entire place for two weeks. She claimed I caused a number of damages, the most ridiculous one being a round mark on her kitchen sink that was present on my arrival. She requested the security deposit of 500 Brazilian reals, which unbeknownst to me was unable to be collected because Mastercard had frozen my card in Brazil (I used it and it must have been flagged for suspicious activity – there is a lot of corruption there). My phone did not work as I had to put a local sim card in, and I hadn’t logged onto Airbnb for days when I realized this.

I politely explained to Airbnb how her sink was leaking, which caused her towels to be in poor condition which she also charged me for falsely. I included photos of bugs in her bathroom when I got home (to the US). I called Airbnb but never heard anything for months until January of this year. When they sent that email (about five months later) my account had been frozen since my trip. They ambiguously worded an email that said I owed 500 reals with an additional 2800 “to be collected ” on top of the security deposit. I again stated honestly that I did not causes any of those damages, and asked for clarification over the matter: why did they seem to be asking for much more than even she had asked for originally?

After I asked for clarification, they refused to give me an answer. I called them and again asked for clarification. I later received an email back, as the customer service representative put a note on my account or something. The response: I was no longer welcome as a customer and they blocked my account. It didn’t matter what evidence I showed Airbnb or proof. I only had pictures of the sink and bathroom bugs, but she claimed it cost her about 400 dollars to replace the countertops (which had marks on it when I arrived – she claimed I made them in order to scam me).

I would recommend everyone using Airbnb to fully document anything about the place upon arrival so this doesn’t happen to you. It was a perfect service for me, until it was not. I did not have one bad review.