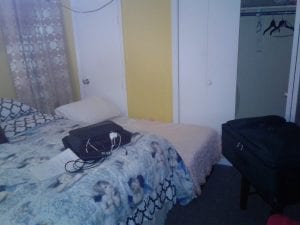 This is most of the message to our “host” after fleeing an Airbnb… I tried to be polite. Airbnb support was no support at all. They left me hanging and kept referring to their TOS (which is very lengthly; kind of unreal, really) instead of just walking me through it. They sided with the host.

“You advertised your “entire apt” as having a kitchen. A kitchen would include a kitchen sink (and some kind of stove, but I will concentrate on the sink as that was my main concern). Saying that you have a kitchen would be like saying you have a bathroom and then when the guests show up, it has no toilet.

I know that you mentioned in your listing that there was a fridge and microwave; you even picture the toaster and a kettle but you fail to mention that you do not have a kitchen sink. With all the explaining you do on your post, why would you fail to point that out? It is very deceptive.

A kitchen means that you have a sink to wash food, hands and dishes. It seems that you expect guests to use the bathroom sink, which is gross and unsanitary, but not even feasible as it is a small sink and very slow moving drain. Using the same analogy as above, it would be like describing the bathroom as a “nice bathroom with walk in shower and hold bar, pretty red rugs and a small sink to brush your teeth” and then when the guests show up they find out there is no toilet.

It is a given that a kitchen has a sink. It goes without saying. It is listed as an amenity on the front page and comes up in the search as such. It also comes up as an “entire apt”. It goes without saying that it would have a door to it, such as the door into your quarters. A shared entrance does not explain the situation. Again, with all the words and long explanations, this is something that would need to be clearly stated.

Having a lockable door to an “entire apt” goes without saying. Just like the one you have to your quarters. Guests would be out in the open just coming out of the bathroom (which is too small to get dressed in). This is not private or secure. It took me trying to make a can of soup for it to really sink in.

We realized how unsafe we felt and that it was not a livable situation. I texted you a polite message as it was in the middle of the night, to which you did not respond. We called an Uber and left immediately. I did not hear from you until much later.

Other facts: The walkway is not well-lit as advertised (it was so dark I could not see the items we dropped). Flushing the toilet directions should also be in your explanation as you expect your guests to use very little toilet paper and keep flushing and flushing. There is obviously a problem with the plumbing as evidenced by this and the slow moving drain.

You asked us to be discreet (very strange). The boiler would not turn on; there was no heat. There was a stain on the heated mattress pad that you didn’t know how to wash (meaning the bedding was unclean). The ceilings were low with no noise protection at all.

You mention in your ad that we would hear footsteps as you got ready for work, but that is an understatement as we could hear your TV. It sounds like elephants are tromping on above your head. The ten steps into the “lower level” are very steep and narrow, which definitely should be noted in your ad since you go to the trouble of saying you have the bar in the shower. For someone with a minor injury, how would you expect them to go down those steep stairs? This is a bit deceiving. The single bed was just a cot with no room to get in and out comfortably.

Please refund the full amount less one night and the cleaning fee. The condition of your “entire apt” caused us to cancel our trip and return home as we had counted on these lodgings. This will be the last attempt to settle this with you amicably. I will take further action if necessary.”

Obviously, she is not refunding our money (about $2000 for a month’s rental). Even though I pointed all of this out to Airbnb support, they have sided with the host, ignoring this falls under travel issues per their TOS.

Here is the link to the advertised “entire apt”.  ‘The photos I took were not good (I admit it) but you can see beyond the table the supposed kitchen area in which there is no sink or stove. She admitted she had to take the kitchen out due to complaints from neighbors. How can you take a picture of something that is not there anyway? The cot was right up beside the bed, with no way to get in or out of it other than crawling from the bottom. I thought the cots she mentioned in the description must be extra as it listed a double and single bed in her ad.