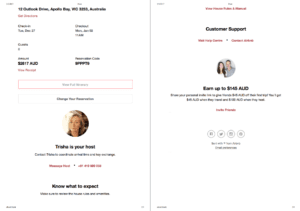 I purchased accommodation through this host for a property called Diandera Dirrah a in Apollo Bay, Australia from the December 27th to January 2nd. I have confirmation emails from Airbnb confirming these dates. I paid $2617 for six nights’ accommodation and on the second morning the host arrived at the property and told us to “get out or she would call the police” as she had “spies in the neighbourhood who told her we had a party.”

We did no such thing. She was yelling, laughing hysterically and threatening us. I had no leg to stand on and we left. We had to camp at a local football oval and buy tents and yoga mats to sleep on as we were five hours from home; it was horrible. We drove past the property and saw she already had new occupants staying there. This is a scam. She took $2617 from hard working, responsible individuals and threatened us. We should have received a refund but Airbnb did nothing to help. She then illegally altered the receipt to say that we only stayed one night for $2617 which is an absolute joke. Please see the attached documents that prove we were confirmed for six nights and then the altered receipt. Do not stay here; they will steal your money.