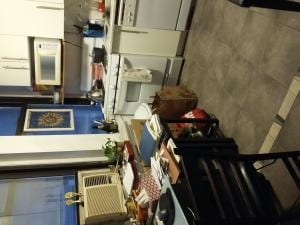 I experienced stress and frustration with the place I chose to stay at through Airbnb in NYC. The host happened to be a fraudulent and shameless person. Below are my comments to Airbnb. To my surprise the comments are not published, with the explanation that the message has private information. I asked to remove whatever was considered private but nevertheless, my comments have not been published. Airbnb, rather than protecting and helping the perspective clients, protects the fraudulent hosts. Airbnb refunded me 130 USD and closed the case without publishing the comments that explain the reasons for my frustration.

I do not recommend this place in any condition. It is dirty, and has never been cleaned for at least a month or more. The host was also inhospitable. I snapped a picture of the apartment’s condition for the proof of my complaint. The only advantage of the apartment is its location, but this doesn’t cover the stressf and frustration that you get staying in this place even for short time.

I paid for a master bedroom but instead I was placed in a much smaller messy bedroom, because somebody else had lived there already. The host informed me about the change of the room just minutes before my planned departure to NY. Due to my visa, I arrived three days later than planned. To my surprise, I found an apartment that looked like more like a warehouse of boxes, items, and stuff scattered all over the places. The guests are forced to maneuver between those to be able to move in the apartment.

Due to the conditions above I was not able to use the kitchen. The oven was dirty and piled up with items around it, and using a gas stove may have even caused a fire. The apartment has not been cleaned for a long time, nor was it cleaned while I was there or before my arrival. Everything was covered in a thick layer of dust.

The host didn’t sound friendly at all. Prior to my arrival I called him to confirm my arrival time. Instead of a greeting, his reply was: “Follow the instructions given by email,” which I didn’t have with me at that moment.” The host’s name and the address advertised are not the same in reality. The host is trying to hide himself (it’s not clear why and from whom). My guess is that the host manipulates guests, only to get money from them with zero investments like cleaning the place.

I suggested settlement of 50%, due to the fact that instead of the master bedroom I was placed in a much smaller room, I arrived three days later, and the terrible condition of the apartment. The reply was rude and negative. In addition, I left my shoes and asked the host to sent them back. However, the host, in spite of what had happened, requested 100 USD to send them back. Of course I refused. Attached is a picture of the apartment.