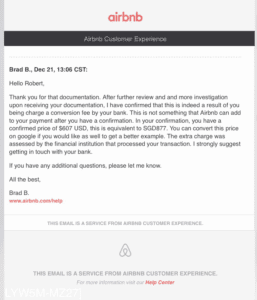 I made a booking on the Airbnb website. It showed me the total was SGD $877 (Singapore dollars) and said it would be billed in SGD. I paid using a credit card issued in Singapore, with the default currency in SGD. My card got charged in USD instead, and there were hefty currency conversion fees from the bank. As usual, you can never find any number to call Airbnb for help. So after a long time navigating their “help” pages, I finally sent them an email to describe the problem. Someone actually replied, sounded polite, and earnestly tried to resolve the problem, but after a couple of email exchanges, you could already smell their dirty tactics on handling complaints. I can summarize their dirty tactics in just one sentence: blatantly lying, refusing to admit their mistakes, and then shifting the blame to others. They replied that the problem was that I was using a US credit card even after I emailed them evidence that my card’s default currency was SGD. They just kept insisting otherwise. They insisted that my credit card wanted to be charged in USD, which was never the case (I even called my bank to question them if such a thing was even possible). When I pushed for a more explicit explanation, they asked me to contact my bank and then simply stopped replying, both on Facebook and through email. The whole time they just gave template replies and sent me links back to their help page, which is obviously useless.