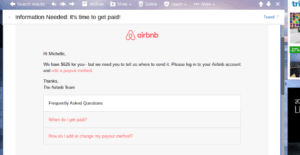 I had rented my condo on Airbnb for about two years with few issues from the company. I finally decided to pull my listing and shut down my account early last January as I no longer wanted to use them as a service to host. Shortly after, I started receiving emails to my account stating “It’s time to get paid” and I needed to update my payment information; they had over six hundred dollars that was still owed to me from a guest staying. I did not realize I had any more money coming my way. I tried to log in to update my payment information as the email suggested but the system would not let me as I no longer had an account. I called customer service many times and waited on hold while paying long distance, but they said they could not help me as I did not have an account they could pull up. I wrote multiple emails in response to the emails they sent me and to customer service team and not once did I receive a reply. Airbnb is basically holding the money they owe me hostage despite them repeatedly admitting they owe me a substantial amount of money through a bombardment of recurring reminder emails to collect the money owed me. I am still getting these emails every few weeks but have exhausted all options to collect it from them as Airbnb will not help me get my money from them. This is totally illegal and straight up theft by Airbnb.