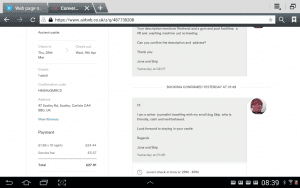 I was looking for my next stay while touring Scotland and Northern England as a freelance writer and blogger with a dog. I had stayed in a lovely cottage in rural Ayrshire for three weeks. It was time to move on and find the next interesting place to stay. Imagine my surprise and delight to find an Airbnb listed as an “Ancient Castle” in Scotby, Cumbria and ideal for people with mobility problems. I am near 60 and have creaky knees. It also said there was a gym and pool available.

I was not sure how it worked out, but the normal price was £139 per night, seemingly for group bookings. However, it came down to individuals and the way it worked out with the weekly booking discount seemed really cheap. Still a little suspicious, but hopeful, I booked two weeks between April 29th and May 11th. I would have stayed in Scotland but the opportunity was too good to miss if true. I bought a train ticket down to Cumbria and waited until the check-in time, between 2:00-4:00 PM, before hiring a taxi costing over £10.

Taxi droppped me off at a pub. I did Google it and thought maybe it was a property behind the pub or in the ground. They knew nothing about it and pointed out the address was further down the road. I walked a half mile and could not see anything which looked like a castle. It was a rural surburban street with beautiful but ordinary large semi-detached family homes. I looked at the numbers on the gates and at #39 and counting up reckoned that #47 was another semi a few houses along.

As I came up to #47, I felt embarrased; it was clearly a family home and not a castle. I wondered how I should do this: should I go up, knock on the door, and ask if they were an ancient castle? Would that make them think I was a mad woman? Just as I approached two teenage girls came up, knocked on the door, spoke to their mum and explained that they were just dropping off their things after school but going out to see friends. The girls shot past me and the mum still stood at the door. I shouted at her “Er, excuse me… could you help me? I am looking for #47, which according to this information on Airbnb is an ancient castle.”

The mum came up and looked. That was her address, and that was even her post code, but she did not have an ancient castle, just a family home. She did not do any hosting or hiring out spare rooms to Airbnb, She was concerned who was using her address, as anybody could turn up at her home and demand entry. What if just her children were at home, and let someone in, not knowing?

I got another taxi back into Carlisle and contacted Airbnb from a pub with wifi. As usual, they didn’t get back to me for the rest of the night. It was getting on and by 10:30 PM with accommodation being snapped up for the Easter weekend I found and booked cheap accommodation in a truckstop on the edge of town in the middle of an industrial estate. That was all I could do.

I did eventually get through to Airbnb, and it was a pathetic response. They did take the fake host and the posting down, but again seemed blasé and offered me £2.73 on top of the refund as compensation. It was a very small change for the extra expense. I would not have gone through the hassle and stress if their host had not advertised an innocent family’s home as an “Ancient Castle” and had strangers turning up at their front door demanding and expecting being put up for the night.

Airbnb did not really provide a satisfactory response to this with only £2.73 to help towards other accommodations. A host tried to evict me onto the streets during Beast from the East and did not care I had no transport. Over 13 people were killed at this time, including a seven year old girl. When will Airbnb take responsibility for the welfare and well-being of their guests?