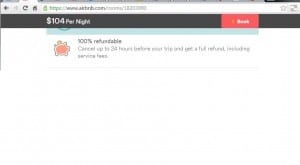 This isn’t terrible, but I feel like a lot of people are probably getting ripped off right now without realizing it. I booked a place that was covered under the 100% refundable policy. This policy clearly states service fees are refundable up to 24 hours before your trip, and the Airbnb refund policy in general says service fees are refundable for guests up to three times a year. See the attached pictures, screenshots from the Airbnb website. When I cancelled and requested a refund, it was not automatically given. After drilling down through multiple levels of their help center clearly intended to prevent you from talking to anyone, I finally go to chat with someone. He told me it was against Airbnb’s policy to refund service fees, but he would do me a ‘favor’ this once because I had booked another place. I thanked him for the refund, but afterwards I pointed out that it said in two places that the fee was refundable. He said, “That’s right, our service fees are not refundable” along with some other wholesome crap about Airbnb being a community. At that point, I moved from classifying customer service representatives as humans to examples of a failed Turing test, and I just hope their developers look at this and at the very least clarify their policy.