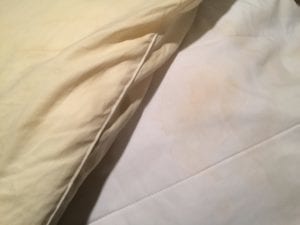 My husband and I booked an Airbnb, for the first time ever, to travel from Eastern Canada to spend two weeks in Scottsdale, Arizona. We arrived only to find the property in a deplorable, filthy condition. I don’t mean dirty; I mean filthy. There was urine and dried feces on the toilet and pubic hair in the sinks. The bedding had not been changed and the pillows, instead of being white, were a golden brown, as were the stains on the bed covering. The carpeting, which was suppose to be tan, was a dirty mess of brown and black. There were dirty dish cloths and open food containers in the kitchen. One of the bedrooms had an air mattress.

After complaining to the host, who was leasing in violation of her Homeowners Association, she tried to tell us that the cleaner had come to clean the house, her water broke, and she had to leave to have a baby. Really… she was nine months pregnant and cleaning? Our host also told us that she had moved to San Francisco; however, when I texted her that the house was dirty, she showed up five minutes later to say that the house wasn’t bad, she tried her best and continued to tell us that she would pray for us. Being thousands of miles away from home with no place to stay, we did not need someone praying for us; it all felt more than a little weird.

I have been trying to resolve this issue with Airbnb; however, they say that they are not responsible for refunds, if the host does not agree to a refund. How can this be? Do they allow anyone to list their properties? People with questionable hygiene, sexual perverts, murderers? Is there no obligation on the part of Airbnb to screen hosts, ensure properties meet a certain standard, and ensure the safety of guests? Have you tried getting ahold of anyone at Airbnb? Just finding a phone number for them is like trying to pull hen’s teeth and they don’t have any. I have learned a very valuable, expensive lesson from Airbnb and I would like to pass on to those considering renting through them: don’t do it. Use VRBO or HomeAway.