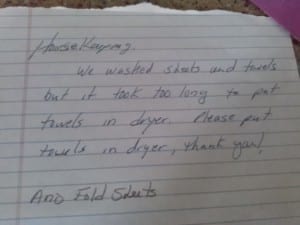 Welcome to your Airbnb rental! Your host knows you love doing housework. That’s why he didn’t bother to have the place cleaned before your arrival. I hope you like dirt and grass clippings all over the floors, food dropped on the stairs, globs of toothpaste in the bathroom sink, dishes in the kitchen sink, unmade beds, and wet towels in the washer. That was the experience we wound up with when we chose to rent an Airbnb property for a weekend getaway on April 22 -23, 2017. The rental fee was $554 for the two nights, which included $395 for the property, plus (laughably) a $100 cleaning fee and a $59 service charge. The check-in time was at 3:00 pm, but when we arrived, we found the place was left unlocked by the previous tenants and we actually entered and saw it between 1:30 and 2:00 PM.

I immediately called the owner to complain, but naturally, he didn’t pick up. I left a voice mail message describing the condition of the house and stating that we did not want to stay there under those conditions and requested a full refund. The owner didn’t respond, so I followed up with a text message at 3:30 PM. Hearing nothing, we located and rented a hotel room (another $143 apiece) for the night. Finally, just before 6:00 PM, the owner sent a text message with an apology but no solution to the problem. When I told him we were staying elsewhere and asked about the refund, he replied that he couldn’t process a refund without proof, so I sent several photos I’d taken at the house documenting the conditions (see attached). He responded saying the previous tenant denied having left the house as I described it. When I pointed out that I had the photos as proof and a picture of the note they left to the “housekeeper” as evidence that they fully expected that the house to be cleaned upon their departure, he texted back that he would come to see the place the next day to verify my story.

The next day, we waited for the owner to get back to us throughout the day but heard nothing from him. Finally, around 5:00 PM, we decided to cut our trip short and return home a day early. Around 8:00 PM that night, I finally texted him myself to ask if he’d visited the house to verify the conditions I described. Surprise – he had not. A day later, he sent a message stating that he would refund $400, which he characterized as “very fair given the facts. I would have gladly worked with you to make this right on the day of your arrival.” Since he didn’t even respond until 6:00 PM on Saturday night, it’s safe to say there was no way he was going to “make it right” on the day of our arrival, especially since he lives in another state at least a 2.5-hour drive away from the property. Given that this dispute stems from the place not being clean, it’s somewhat amusing (but nevertheless galling) that the refund he offered is essentially the amount of the two-night rental cost less the “cleaning fee” and “service charge”. My advice to potential customers: do not rent from Airbnb. There’s no third party resolution support if anything goes wrong (hence my writing on this website). This is my first and last rental through Airbnb.