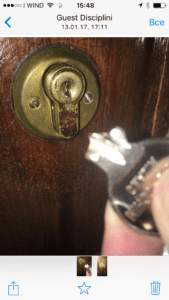 Friday evening my guests texted me with photo evidence that they broke our keys in the door lock. We are in Milan. I knew from experience that it would cost at least 500-600 euro to fix the issue. Forgetting about our evening plans, my husband and I rushed to the place with some tools, hoping we could fix it ourselves. There was no chance; the guests used the wrong key (even though we had explained during check-in which key was used for which lock) and they forced it in a way that the metal key had broken, leaving part of it deep inside the door lock.

The guests were a nice couple from Slovakia. They were terrified and felt guilty as there were five of us (together with the neighbour, who couldn’t get in as the door they broke was actually the common one) witnessing that it was their fault. It was as obvious as 2+2=4. Everybody agreed; there was no discussion there. We called a 24-hour locksmith. They said they would arrive in half an hour and make a determination as to whether the lock needed to be changed completely. It would cost 400 euro without a receipt and around 600 euro with a receipt. The guests were shocked and almost crying. The neighbour needed to be let in; he had already waited outside of his home for an hour. The locksmiths were pushing us, saying that they had a 94-year-old lady waiting for them and that we needed to make up our minds.

We called Airbnb and explained the issue. They suggested we pay and then claim the money back from the guest through the problem solving center. If the guests refused, they would get involved. Everything is protected under the one million dollar warranty. So, we went for the official option and my husband paid the 600 euro. I wasn’t nervous about reimbursement as it was very obvious whose fault it was. We finally got back home at 2:00 AM, but our Friday evening was ruined. The next morning I started the process according to the rules of Airbnb. After a few weeks I received an answer: “We’ve carefully reviewed the claim you submitted and unfortunately, we’re unable to fulfill your request because we do not believe that the guest can be held wholly responsible for the damages caused.”

After a series of messages from my side, they answer was that we could not get a cent back for what we have paid for another person’s mistake hoping for the support of intermediate. Not even the deposit of 80 euro. Nothing. No explanation why, no references to the Terms and Conditions. They simply did not believe me. This was the final decision and end of the conversation. I am really disappointed. Does anyone have any ideas about what can we do in this situation? What lessons can I learn from this? Thank you to everyone who has read this until the end and for your comments.