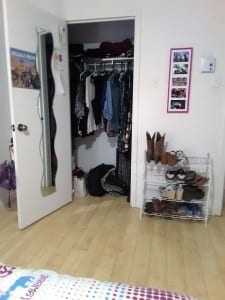 We arrived at the apartment in Montreal at four o’clock in the afternoon, as had been arranged. We had trudged through a snowstorm and were looking forward to what was described in reviews as a clean and comfortable apartment. What we found was that absolutely no provision had been made for guests. In fact, we thought at one point that perhaps a mistake had been made. There were boots and shoes everywhere, with no room for our own. The wardrobes were full of the young woman’s clothes with no space (no hangers) for our things. Every surface in the apartment was covered with the owner’s trinkets. The medicine cabinet in the bathroom was overflowing with no possibility of putting anything of ours away. We had to remove items that were left on the toilet seat and on the toilet tank just to be able to accommodate a few of our own items. We’ve never liked the habit of Airbnb guests (or hosts) leaving opened containers of food in cupboards and fridges. In this case, the fridge, freezer, and cupboards were full. The bottles of liquour in the cupboard might have been for us to use but we weren’t sure that we were supposed to partake. Personal items were left in the apartment with no appearance of expecting guests. The money left on top of one of the dressers wasn’t even tempting – just one more example of the negligence of the hosts. If someone shows up at the door tonight offering to remove dresses, shoes, lipstick, booze, frozen bagels, etc, I don’t think I’ll want to speak to them.