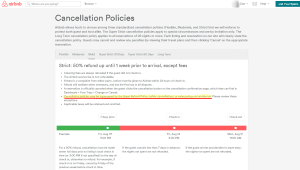 I’ve been an airbnb host for four years with a total of 6 rooms for rent, so I’ve had hundreds of guests come and go, but I’ve never had an experience like this! Most of my rooms are rented several months in advance, and this case was no different. I had a nice couple message me a few months ago and ask to reserve my best room for a two month stay, beginning August 24th (a few days from now). I agreed, and the reservation was made without any incident… until yesterday when I received a message from the guest saying that they had a “family situation” and they would have to cancel their reservation. I immediately replied and said I was very sorry to hear that, but that I would try to find replacement guests for their long term stay right away and that I would refund them for each night that I was able to replace them with other guests (even though I have always had a STRICT cancellation policy set with Airbnb which entitles me to technically keep up to 100% of the guests money for up to one month if they cancel last minute like this). Granted I am a great host and have never actually taken a guests money or double-booked a room, but for the record I have that right when a guest cancels last minute. Well I never knew this was even possible, but somehow this guest contacted Airbnb directly and convinced them to OVERRIDE their own policy and my Strict Cancellation setting and give the guest a full 100% refund even though their move in date was only a few days away! How is that possible? What is the point of having a “Strict Cancellation Policy” with Airbnb if they can decide to override it at any time and completely screw one of their best and most loyal hosts?? At this point I should also mention that my wife is pregnant and due to have our first child on August 27th (of course he could come early or late) so now I not only have an empty room with zero money coming in for it, but I have to scramble around to find new guests to fill the same time frame when I should be focusing on my new family expansion!

The attached images show complete documentation of the messages I received, as well as my Strict policy and the crazy loophole that Airbnb has where they can just cancel any reservation at the last minute with a full refund without thinking twice about the impact on the host!

I don’t know about you, but I’m going to serious look into switching all of my airbnb hosting business to another service like VRBO or Roomorama etc.

SHAME ON YOU AIRBNB! Stick to your word and don’t screw your hosts.