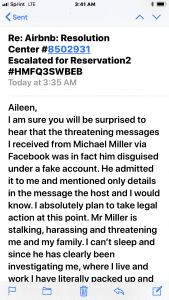 I have used Airbnb for work-related travel and never had a single issue until Wednesday, August 29th, the day my horrible nightmare began or as I call it “the cockroach chronicles”. I work as a outside sales rep and I travel daily thru SA and the surrounding rural areas. Since I was required to be at a job site at 7:00 AM on Thursday, August 30th, I booked this room since it was fairly close and I wouldn’t have to make the one-hour commute from my residence. The price seemed very fair and would save me money on gas. I did not receive the actual address until I paid for and booked the reservation.

When I pulled into the neighborhood, I was immediately nervous about the safety for myself and my new vehicle. I was informed in advance the host was not home and I was to use an access code for entry. I tried to use the access code numerous times and it would not work. This was roughly at 8:00 PM. I messaged the host indicating the code was not working and he didn’t respond immediately. Since the neighborhood did not appear to be safe and I was getting scared I knocked on the door.

A young women clearly annoyed told me that code has been provided and I wasn’t following instructions. I told her I attempted to use the code and it didn’t work. She walked off on a huff and mumbled under her breath. I was caught off guard by her reaction but was tired from long day at work so I proceeded to go to my designated room. When I turned on the light switch I immediately saw 2-3 large cockroaches scurry across The linoleum floor.

I screamed and the young lady appeared again. She asked what was wrong and I told her there were roaches. She said the exterior of home had recently been treated and offered that as an explanation for the appearance. I asked her where the bathroom was and she pointed down the hall. Again I turned on the light switch and other cockroaches even bigger decided to welcome me in. This time I went directly to the room and said I was outta there.

I got my belongings, ran to my car, and notified the host his house had a bad odor, had a roach infestation, and the bathroom was disgustingly filthy. He offered to leave work and come home and clean the bathroom. I indicated I appreciated the kind gesture but no amount of cleaning was going to provide me with a peaceful night of sleep. Besides it was late and I just wanted a shower in a clean bathroom and to lay my head down without fear roaches would have a feast on my face while I slept.

I requested a full refund of my invoice since the post failed to mention my roommates would be cockroaches. Not only did the host refuse my request for a refund he also sent me a request for a $70 cleaning fee. No mention of a cleaning fee was made prior to making the reservation, only mentioned once I cancelled. I posted a negative review of the home and I received a Facebook friend request from someone today. Since we did not share any mutual friends I declined the request then a short time later I received what I interpreted to be a threat.

After I basically told the person sending the message I knew it was regarding the Airbnb incident due to the timing, the individual basically admitted he was the host and demanded I remove the negative review. Now I don’t want to sound prejudiced against individuals who are clearly intellectually challenged but I was taken back that this person had the audacity to make a threat and send me a map of my work address as a bullying tactic. It got better; he even called my employer and claimed I stole belongings from his home.

I swear I didn’t steal his beloved roaches. I was in this person’s home for less than five minutes. Even he admits that, and out of the given minutes I was in his home, his roommate was scowling at me for four. Now if this doesn’t tell you what his brains are made of maybe this will. He posted a negative review of me on Airbnb along with my personal information: the actual name of my workplace, my full name and what my job description was. Guess what? Airbnb refuses to take down the post.