I had an internship in a foreign country (not tropical, and not at all known for big problems in the slightest). I needed a place to stay for two months and couldn’t access any of the local sites from the states. So I turned to Airbnb.

Now, we all know Airbnb’s absolutely shitty long-term cancellation policy of losing a month up front (if not more). Well, on day two of my trip, I woke up to a cockroach in the bedroom, and this dude was absolutely massive. I also woke up pretty late, around 8:30 AM, so it was broad daylight outside.

I immediately Airbnb messaged my host and Airbnb support, specifically saying I found a cockroach. I then ended up killing it (this thing was so massive I couldn’t get its dead body off my shoes and ended up tossing them). My host’s response was to go buy something at the store and put it in the apartment… so spending my own time and money to fix the problem in his place.

I came back from work later that same day and there was another massive cockroach by the TV. At this point I was absolutely disgusted: two cockroaches in one day, both in broad daylight. I told my host I wanted to leave and since I had only been there for two nights I wanted a refund. I found another place and everything and wanted to leave. He refused a refund and told me to essentially wait a week and deal with it.

The day after, I woke up again to a third cockroach in broad daylight. This one was way slower so I took a video of him before I killed him. At this point I have messaged my host multiple times, messaged Airbnb, and tweeted at Airbnb. There has been response from Airbnb and no successful response from my host (he had mentioned when I checked in that he was leaving for Paris that coming Friday for two months so probably more worried about his trip than his guest).

At this point it had been a solid 60 hours and three cockroaches. I vacated the property. It was that bad I had to leave in the first week of my long-term reservation (there were also dead cockroaches literally everywhere in the hallway – it was nasty). I sent videos and pictures to Airbnb and still, no response.

Finally I cancelled the reservation so that I could considerately let my host re-list his place and Airbnb finally responded. They said that because I cancelled before hearing back from them I was not entitled to anything. There’s almost $900 down the drain. They told me cockroaches were a “minor” issue, even though almost every doctor and sanitation worker (and even landlord) would disagree, and I had patiently lived with them for three days coming out in broad daylight: clear signs of an infestation, especially in a city that is not at all known to have any issues with cockroaches. 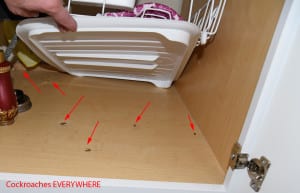 I’m a nice guy with a wife and two young kids.  I was foolish enough to book with airbnb and stay at 1909 Ala Wai Blvd, Honolulu. This is the review I wish someone had written so I could have read it and avoided the nightmare stepping foot into this building.

WARNING TO ALL: this building is a broken down DUMP infested with cockroaches and located in a very seedy area. Immediately CANCEL if you have rented a condo here (thru airbnb-dot-com or whatever).

1) We airbnb rented a condo on the 3rd floor

2) arrived to find 1909 Ala Wai to be an old dilapidated disgusting building with MANY condos in obvious disrepair.

3) the people we saw in the elevators and hallways looked like hookers and thugs, total deadbeats. No exaggeration.

4) opened door to the 3rd floor condo and saw dozens of huge cockroaches scurrying across floor. Same sight in EVERY room and cupboard! We even saw cockroaches running up the walls!

5) Windows broken out, no screens on windows, holes in wall, tile broken up on floors. We called the agent (handling this airbnb property) and they came over and even they were disgusted (or pretended to be!) We refused to spend one night there because my entire family was so disgusted with 1909 Ala Wai Blvd.

WHY AIRBNB SUCKS: As soon as that airbnb “host” for that cockroach filled condo realized we would NOT stay in her property, she told us “I see you want to cancel this reservation. So I’ll just go now and cancel it” By cancelling AS HOST she just prevented another disgusted renter from posting an ACCURATE negative review of the property on airbnb. You see? That’s why airbnb has positive reviews for properties that are disgusting cockroach and bedbug infested DUMPS. The host just cancels the reservations of unhappy renters so they cannot post negative reviews! Go read the Yelp reviews also. Search for cockroach. Be surprised how many agree with my above review. LESSON-LEARNED: you can go to airbnb and rent a property with GREAT reviews and often find that property is cockroach and bedbug infested DUMP in seedy dangerous area. Guess who wrote those “great” reviews? The HOST agent who owns the cockroach property!