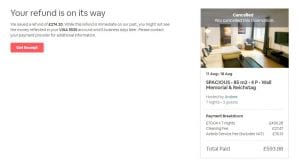 Well this is a strange one as I never even made it to my holiday. I had booked an apartment in January 2018 at the same time Airbnb had started up their new “pay less up front” system. I had funds in my bank but decided to take advantage of this feature because the booking was eight months away. Everything was fine and the initial payment for 50% of the full bill went through when booking.

However with time passing I had my payment method bank card lost/stolen in July, just a month before my trip. Now my future holiday was not on my mind at this stage, the only thing on my mind was to cancel my bank card and order an updated one. I still thought all was well and Airbnb next contacted me shortly before my trip to state they had been unable to take payment via the ‘cancelled’ bank card that was still on my account. The email simply told me to “update my payment method” so this would be seamless: I had my new bank card so I logged in, added a new card number to my account, and set the card as the “default” payment method.

Now was the time to get excited by my upcoming holiday… wrong. Airbnb never tried to take payment from this updated card. The email that had told me to update my card details forgot one important thing – “they would not be taking any notice of the new details so unless I got in touch with them my booking would be cancelled.”Well I assume that is what was left off the email as the days elapsed and whilst I thought money had been transferred it had not. The day came a week or so later where by I got an email to notify me that my booking had been cancelled due to non-payment of the final installment.

What an absolute joke of a system. Offering a split method of payment feature but having no system in place to take money from an account via a different payment source than the first installment. It is beyond ridiculous. I immediately contacted the German host who told me I had “cancelled” the booking. I explained the stupidity of the above and she seemed to take notice. She notified me that she would contact Airbnb to find out more after I asked her to keep the dates of my upcoming booking available for me, as the money was in my account ready to be sent.

Unfortunately after this I was met with an eery silence from my host. Her apartment had now been strangely ‘de-listed’ from the website. I presumed this was my host protecting my booking making it impossible for anyone else to book the dates. The de-listing of the apartment lasted more than 48 hours before it resurfaced. I initially asked my host if she had an update for me but was greeted with further silence. Then later on when I looked at the calendar my dates had been ‘re-booked’ by another customer.

My money had been swiped from January and under Airbnb’s rules I had cancelled. The fact remains I had not cancelled and Airbnb had failed in their duty to act as the agent and make sure payments were made. I had finally found an email address for Airbnb during this debacle before I had found out my host was busy recouping money from duplicate bookings on her property. They were quick to respond and notified me via a voicemail on my mobile and via email that they would try and resurrect my booking and send payment to my host.

Unfortunately they soon realised my host had re-booked the apartment and decided to deaf me from there on in despite further emails to them to ask for the situation to be fixed. Ultimately I have currently lost £319.68. My host benefitted mainly from this but Airbnb took their percentage without any thought and have laughed at my requests for a refund of any money.

I opened a resolution centre request for a refund. My host told Airbnb I had cancelled so was owed no money, and Airbnb closed the case straight away. I have used Airbnb with no problems in the past, but if they are going to offer new payment plan options and not have the resources to make sure these are bulletproof then they should not be offered. There was no excuse for my cancellation booking and failure to provide the rightful compensation that I am now owed.

As all this occurred only a few days before my intended trip I had to book hotels at the last minute costing a further £600 on top of the funds Airbnb and my host had received. They do not believe they owe me a penny. Their customer support replied to none of my messages after their initial contact to ‘rectify the booking with my host’. I have full evidence of everything but no way of raising legal action to this company. The only method I can use is to contact various media outlets and show their company up as inefficient, customer ill-friendly and greedy.

Did I even mention that on my morning of arrival at my destination city of Berlin my host contacted me via WhatsApp to ask for a ‘suitable time to meet’? How amusing – she was in such a rush to take my money she had forgotten to rearrange her booking plans and contact numbers. On the first day of my holiday I was left with the option to reply and arrange a meeting to cause her problems, or just ignore her and try and enjoy what was now the most expensive short break I’d been on in my life.

Airbnb owes me the entire amount they received directly from me and they should be compensating me for my host’s greed. Hopefully telling this story will help make others aware of the greed of some hosts and the incapability of Airbnb to provide an efficient, stress-free holiday booking service. I will not be using Airbnb again unless this matter is resolved to my full satisfaction.