Is Airbnb just a fake company? Based on my experience, it clearly seems to be the case. I live in Sao Paulo, Brazil. I had plans to be in Philadelphia for a week to celebrate my ten-year MBA reunion, and had booked my Airbnb more than two months in advance. So, I flew nine hours from Sao Paulo to JFK, rented a car and then arrived in Philly after traveling for more than 15 hours. Once I arrived at the address of the Airbnb, I realized that I could locate the two adjacent properties but not the address on the reservation. So, I called the host and found out that the number had been disconnected. That’s when I realized that I had been pranked, except that there was nothing funny about it.

I immediately contacted Airbnb, and they tried to contact the host, as if that would help. After an hour or so, they said that I was right and asked me to check other locations on Airbnb. This was a fun exercise, given that I had just been through a long, international trip with plenty of luggage to lug around. Finally, I decided enough was enough and downloaded and got a hotel through the app HotelTonight (secretly, I am sure HotelTonight must be delighted that the incompetence of Airbnb sends customers their way). Once I checked in, I talked to Airbnb again and they offered me a subsidy on the hotel for the night. The next day, I went through the same routine and tried to book another Airbnb, but nobody responded on the site.

There were plenty of fake listings. In one case, two professional realtors had put up the same apartment on the site with vastly different prices and exactly the same photographs. I tried to learn more, but was rebuffed as soon as I pointed out this discrepancy. To summarize, I had to pay for a hotel for the entire trip. So, the cost of me staying in Philly on Airbnb would have been USD900; instead, it ended up being USD2250, blowing through my budget. To top it all, an Amazon package I had mailed to the fake address was not recovered either. It has been more than a week after my trip and the “case manager” has stalled and not resolved the problem despite repeated followups on their website and Twitter. Their strategy seems to be sticking their heads in the sand and hoping the issue goes away. Airbnb may be a fake company, but my experience was real. Stories like these are not going away. 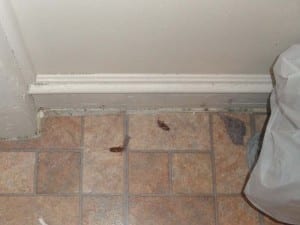 I stayed in an apartment that Airbnb found for me in Philadelphia. It is in the Rittenhouse area and is listed by Andrea. I requested to stay with my wife and three children, ages 6, 4, and 5 months, for five weeks. I traveled all the way from Europe. I was in constant contact with the host before arriving and read all the comments about the location. I am a Veteran in the US forces and have been overseas for 10+ years. I wanted to show my family where I am from because they have never been here. My parents left the city a long time ago. After an eight and a half hour plane ride we arrived to a dirty apartment. We told the host there was leftover food in the cabinets and refrigerator and she suggested we eat it. My wife and I decided to clean the apartment because, where else were we going to go?

Cleaning consisted of swiping down the microwave, and finding bedsheets with human hair all over them. After vacuuming everything, we found more things wrong within the first 24 hours of staying. The apartment was infested with ants and large roaches, the kind that are as large as your thumb. One flew across the room onto my daughter’s bed. The host said, “we are in the city and you should expect roaches and mice.” The host did offer to spray the place with pesticides but told me I had to find out if they would be safe for children as the problem occurred after the first 24 hours. I spoke with the exterminator and he sent me a write-up of his poisons. It said that if any were inhaled to go to the emergency room. Needless to say, I told them they could not use it around my children. I was told that was all they could do. My 4-year-old daughter stepped on a piece of glass in the apartment and punctured her foot. The roaches are a constant problem. I brushed my teeth and found ants in my mouth because I forgot to check my tooth brush.

The listed washer and dryer was coin operated next door, shared between the tenants of two fully occupied buildings. The host does not supply quarters and I was told to go to a bank and get them (not mentioned in the listing). The ceiling began to leak on the outlet in the living room where the air conditioner is plugged in. The host never came by to check and told me if I wanted to move, I should contact Airbnb, as she is not responsible for the problems. I contacted Airbnb several times and the people I spoke with sympathized with me and my family. Airbnb offered me these options: refund what is left of my money from the stay and send me on my way; or refund what is left of my money and coordinate a stay somewhere else that is smaller, has fewer amenities than this place was supposed to have, and costs over $1000 dollars more.

They also sent me a $75 gift certificate for a five-star restaurant that would cost over $100 for the evening. I didn’t have the money to move out or buy a ticket home, so my family and I were stuck in an apartment with roaches, ants, and a ceiling leaking on electrical outlets. The apartment smelled of sewage because of the water leak, and more rain was projected. The host, Andrea, has her money, Airbnb has their money, and my family and I were stuck. Airbnb did send a cleaning crew by, which helped. Then less than 24 hours later it rained again so the place still smelled like sewage. The bugs never left. If anyone would like to see pictures I would be happy to provide them.

Be aware if you are in a situation where Airbnb cannot find something for the price they deem is appropriate they will let you rot in a location that has been proven to be vermin infested and dangerous. Because I could not leave I was told I wouldn’t be reimbursed for anything when we left. God help you if you have children and use Airbnb.

UPDATE: After posting this on Facebook Airbnb did pay to move me for my last eight days out of a 38-day stay (all it took was me letting the world know what was going on). Both Airbnb and Andrea refuse to discuss or pay for the damage to my property that occurred during the stay. They also told me if I wanted to write a review of the property I had to send them the review so they could screen it first. The property still listed on their site. They never pulled it.