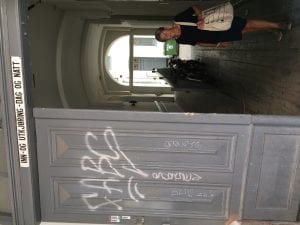 I made a reservation for May 25th, 2018 in Oslo, Norway for July 31st to August 3rd. The reservation was confirmed by the proprietor. The printout provided showed an attractive room but did not give further details. We finally managed to find the address but to our surprise no one was present to let us in. We then called the host on her mobile and were told by her to report to her place of work, which we found with difficulty.

We received a set of keys and returned to the property through a front door marked with nasty graffiti and were shocked to find that no cleanup had been done by the owners. Dirty linen was in the bathroom, kitchen and bedroom, with a dozen pair of shoes lying in the corner of the entry room. Even more shocking was finding a ladder without a handrail required to reach a mattress lying on the floor which one would have to crawl to in order to gain access; the ceiling height was only about a meter.

There was also dirty linen covering the bed. None of the bedroom features were mentioned in the email we had received from the host confirming our reservation. It would have been dangerous to navigate the ladder at night if one was to access the bathroom on the lower floor. Accordingly, we did not check in and notified the host and Airbnb of our concerns. We found alternative accommodations with difficulty at a busy time in Oslo.

Airbnb’s response has been really poor and unprofessional. There have been long waiting times with chats with people from California to the Philippines. We were assigned a case manager who expressed concern. Since we did not receive follow up on several phone calls – always being connected with a different person who promised that our case manager would get back to us – we have become very frustrated since a full refund has been requested given the dirty premises and equally the very dangerous and poor quality of the accommodations.

I can guarantee that I will never engage the services of Airbnb and will let my friends and family know of our concerns. I may also seek legal advice to settle this outrageous problem to our satisfaction.What a scam.

Two months before our trip, I booked a full apartment rental for four nights in Rjukan, a small town in southwest Norway. Nine days before our arrival, our host informed us that he was planning to go on a ski trip, but his partner was injured. He was wondering if he could share the apartment and sleep on the sofa bed of the small apartment.

While I pondered the decision of sharing an apartment with a stranger, he cancelled the reservation. The town is fully booked due to a climbing festival and there are no available homes or rooms during these four days. Airbnb customer service assured me that “they are with me every step of the way.” However, they have only managed to find rooms 1.5 hours away and offered no reimbursement. They used the phrase “rest assured we’ll have this taken care of” three times, and taken over 24 hours to respond, which sort of undermines it. At this point I’m just trying to get them to admit that they can’t help.

Due to a bad internet connection and just now being able to book some accommodation, we can only now write this email. We have tried to contact Airbnb, but every time we get an error message. We booked a place through Airbnb and it was a nightmare. Our first night in Norway (which was eagerly anticipated) disappeared and became very irritating. First, we couldn’t find the boat (through bad communication as there was no number). After an hour drive and asking around, we found the office and had to ask inside the “Asker Marina” where the boat was. The lady couldn’t help us as we had to provide a number, which we couldn’t.

Luckily, we had wifi and emailed the host, Pedro. He eventually sent his friend over to help us. The friend was really helpful and showed us the boat in which we were staying. Inside, there was a horrible smell. It was very dirty, but we thought if we left the doors open for a while, we could get some fresh air inside. After an hour, we found out that the toilet wasn’t working as the valve for the flush got stuck. We emailed Pedro (he was apparently living in Spain); he first asked us to contact him by phone in Spain. However, we could only send email, so that was not an option. He said he would send his friend to help, but we had to wait 1.5 hours as his friend was that far away.

We had dinner and when we came back, his friend was already there. He fixed the valve. During the night, we woke up as the front of the boat (where we were sleeping) was leaking and the water dripped into my husband’s ear. My bedding and hair was wet and all the water came from the ceiling (photos have been taken). The floor was covered with water and we had to put the towels on it to avoid getting our feet wet.

We couldn’t sleep anymore, but couldn’t leave either at 3 o’clock in the morning. The next morning, the lady from Asker Marina came to us and told us we had illegally slept on that boat as nobody is allowed to sleep on the boats. People who are renting a berth are aware of those rules. She said the owner of the boat is not allowed to make money by doing illegal things and certainly not through Airbnb. She advised us to make a complaint as his boat isn’t suitable for renting out.

We had an email correspondence with Pedro and told him we wanted 50% of our money back. We couldn’t find another hotel or place to sleep around 9:00 PM that night when we found out that what was mentioned in the Airbnb wasn’t delivered and we were so tired that we weren’t able to shop around for another place to sleep. We still want at least 50% of our money back as we feel mislead by Pedro and his advertisement with Airbnb. Pedro also promised a private bath (which was there only for public use – very dirty; see photo).

There was no Zodiac or Fjord tour, as there was very bad communication as to which boat did the tours or how to get there. There was no description where things where how they worked. We weren’t able to close the boat properly so we needed to take our valuables with us all the time (the boat was completely open with no seal or lock). This boat was old, dirty and leaking through the roof (when it started raining during the night).

Finally, there was the host’s attitude against us, first promising to refund our money, later rejecting this, and starting to accuse us of several things. He charged us a lot of money for nothing (two different prices in Australian dollars and Euros and all illegal; bad for the reputation of Airbnb). It was our first time in Norway. We saved a lot for this trip and he made our first night a nightmare. This kind of advertising is misleading. Airbnb needs to protect other people from this kind of Spanish Mafia.