My niece booked our Airbnb house in Potsdam, New York. We had six adults and an infant, so we were looking for somewhere with two bathrooms. A couple of days before we arrived, the host texted my niece to say that they were remodeling the second bathroom, so there would only be one bathroom available. As it turns out, even if both bathrooms were available it wouldn’t have helped much as the water pressure was so low that only one shower could be used at a time and if a toilet was flushed during a shower… well, just imagine.

The dishwasher had a note posted on it not to use it. After being there we assumed that was also because of the low water pressure. The water tasted quite bad and we bought bottled water. There was no mention of this in the description. The instructions asked that only cold water be used for laundry, so that’s what we used. Unfortunately, there was also no mention that the water would stain whites and two of my shirts were ruined.

The working shower control had to be turned “just so” to obtain a comfortable temperature and maintain enough pressure to shower. A fraction of an inch to the left of that magic spot and the water was scalding. A fraction of an inch to the right and water pressure was not sufficient. The water pressure continued to decrease and on the last night and day we were unable to shower at all. The toilet wouldn’t flush on the last day either.

The property is posted as being able to sleep seven people. There is a two-person size bed in one bedroom and a twin bed in each of the other bedrooms. The couch in the living room folds out, so I’m assuming two people could sleep on that. That adds up to six people. I’m not sure where number seven would fit.

I should mention that the host did refund $150.00 for having only one bathroom at the last minute. My niece has emailed him since, explaining the problems as he may want to remedy them before he rents it out again, but he has not responded. I will mention that it was clean and the air conditioning worked fine. Personally, I would like to have a large bit of what we paid to stay there refunded as it certainly was neither convenient nor pleasant and my shirts were ruined.

This experience makes me very reluctant to use or recommend Airbnb in the future. In fact, I have already told the story to quite a few people, some of whom were specifically inquiring about Airbnbs. 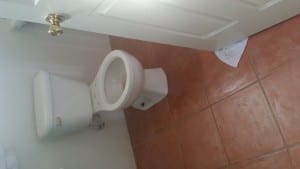 I booked a house near Puerto Vallarta, Mexico last weekend, July 28-30, 2017. Making the reservation was smooth with no problems. When Friday came, the Airbnb app gave me the address where the house was located, and I already contacted the host where I learned he was not the house owner. I told him that we were running late because the traffic was very unforgiving coming from Los Angeles to Mexico. As we arrived at the destination that Airbnb gave me, the house was nowhere to be found. That’s when bad things started happening.

Imagine being in a different country late at night trying to look for a house that you don’t even know. I contacted the host and he told me that my party and I were nowhere close to his place. He gave me directions on how and where to get there. As we arrived at the property, we noticed the house was a great size and looked pretty decent from the outside. As we waited for the caretaker to open the gate, we met the host and were finally invited inside after the gate was opened by the caretaker. The host let us into the house in which had three bedrooms and two studios, which was a good size for my party: five adults, one teen, five kids.

As we went up to the second floor, we found that there was no fridge, no stove, and no microwave. As I continued to have a gut feeling that this stay was just gonna get worse I stayed optimistic and told my wife we should head out to Walmart early in the morning so we could get an electric stove; that’s the only thing we really needed because we brought our own cooler with our food to cook anyway. It was pretty iced up so it should have been good. As the host gave us a better look of the premises we noticed the rooms were average, but the two studios had clear glass walls. They had sliding blinds but they were pretty old, worn out, and raggedy. Then we headed to the roof. It had cement tables and benches. There were guide rails to prevent you from falling but they were unsafe – unstable and wiggling – and one part in which the glass was broken and had been blocked by a broken heater.

The bathrooms were okay. Unfortunately we had women and girls in our party, so that sucked for them because some of the restrooms didn’t have toilet seats. That having been said, we were tired from the drive and traffic. We decided to just sleep it off and had no other choice at that point because it was almost midnight with no Internet to work with. As morning came, we went straight to Walmart, got what we needed, and went back to the house.

As we were eating our breakfast we noticed that some other people were around. We figured they were friends of the caretaker just passing by, bu those people ended up being surfers, because the house is really close by the ocean. I decided to contact the host to check in with him as to ask if there should be other people in the vicinity since the host fully disclosed that the place was all ours. He called me and confirmed the property was ours. No one should have been there besides my party. I let that one go since the surfer guys didn’t take long, they left after a couple hours.

We headed out to do our trip into town, practically stayed out the whole day, and came home almost midnight. We honked and just waited for the caretaker to open the gate for us. Little did we know there was a small party going on and we felt like we were crashing the party. People were on the roof sitting on the ledge drinking, beers were on top of the cars, and there was a radio playing. At once I called the host and I told him that this was happening, so right after I messaged him he called back quickly and asked what was going on. I told him that his caretaker had visitors on the premises, drinking and having a party. People were on the roof and the two other rooms (unoccupied, suppose to be empty and unrented) were being used. I told the host I didn’t want to have a hostile situation so I would let the party go on but I needed it to be finished by midnight. The host agreed, as our kids simultaneously got ready for bed.

As soon as it was time for the adults to get ready for bed the water shut off. Again I contacted the host and his reply was to talk to the caretaker and she would help us out. We were already feeling like outcasts with a party on our own rented house, and now the host wanted me to go and talk to the caretaker, who was having a party. A few moments later I decided to come down to where the caretaker and party was and ask her; to my surprise, she was not in. The lady told me she left not knowing what time she would be coming back. We all decided to rest and use baby wipes just to get through the night. Unfortunately for my cousin, she was in the middle of showering when the water had gone out, so they used bottled water just to rinse off.

I stayed up while my whole party was resting, because people were still on the property, it was already past midnight, and the caretaker was unavailable. Between 3:30-4:00 AM I heard yelling, arguing and threats being yelled, so I walked out and went outside to check up on it, just to learn that it was the caretaker cursing some guys out over dropping little girls off. Mind you, it was 3:00-4:00 AM. The caretaker saw me and so I approached her and asked what was going on with the water. She said it was cut off, and she would know what’s going on in the morning.

I got up around 6:00 AM to see if the water had been fixed. Unsurprisingly, there was still no water, so I went back to the caretaker and knocked; no one answered. I went back abut an hour later and a man answered the door. I asked where the lady caretaker was. He told me she was asleep and asked me how he could help. I asked him what was going on with the water. He said the water was shut off, and they were going to talk to the owner to see what was going on. We decided to get our breakfast going so we could go ahead and do the last part of our trip.

If you think the hell stops there… the electricity shut off. Now the electric stove I brought was all for nothing. They said the circuit breakers shorted out and there was no way to get a quick fix. That’s when my whole party decided to pack it in. We placed all our belongings in the car and just gave our kids a quick walk by the beach. I tried calling and messaging the host but he didn’t reply until later on that day, offering a $100 discount. While I was talking to the host I told him that we ended up leaving the house to get a hotel room so we could get a decent shower, we ended up throwing our food to be cooked away because it was already half spoiled, and we ended up spending more for breakfast and lunch. The whole party ended up spending more, with the intention of saving using Airbnb. This was not even my first time going to Mexico as my wife has family down there.

The sad part is that it was my cousins’ first time coming down there. I called Airbnb and told them what happened. They told me to send a copy of the receipt of the electric stove that I bought and they would reimburse me $200 and the host $250. However, the food wasted, the stress, the hotel we ended up renting to shower in, the unplanned breakfast and lunch… I told Airbnb that it doesn’t even come close to whatever they were reimbursing me. Airbnb got so rude, thinking I was money hungry, which I’m not. I just wanted my party to be given back what they thought was right. The operator was no help either, telling me that the case was already closed and they could not reimburse anyone in my party because they were not listed on the website. I put down ten people as guests and they told me I should have put their names down so they could reimburse them. I’m still waiting on Airbnb to fix this for me.