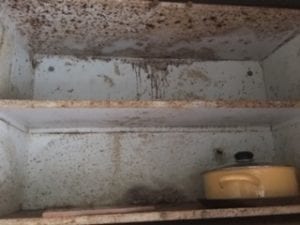 Where to begin? Since I had 2, similar, experiences in Mexico recently, back to back, I’m combining them into one posting.

The first occurred in San Cristobal and the second in Mazunte. Here is the listing for the Mazunte Airbnb:

We had booked a two bedroom casita with kitchen and bathroom. Upon arrival there was only one bedroom apparently in use. The second one was up some dangerous steps and obviously not in use- no bedding on the bed, no closet, dresser or bedside table and a pile of broken tiles in the corner. My first clue should have been the fact that even tho 2 were listed, there were no pictures of the second. In addition, there was no shower stall, just a shower head in the ceiling of a very tiny bathroom. And the kitchen was dark and dreary. The pictures of this place had obviously been enhanced, making it look so much better than it was. And the amenities list had been embellished- to put it nicely!

The housekeeper greeted us and promptly called the host when we complained about the lack of a second bedroom and lack of amenities listed- especially a washer. I am on a 2 month trip and specifically look for a washer whenever possible.

When the host arrived she seemed shocked and embarrassed when I showed her the list of amenities. When it came to the second bedroom, she reasoned that since I had indicted there were 2 of us, we only needed one bedroom. WRONG! She offered to ‘make up’ the second bedroom or give us a full refund. We opted for the refund, since there was a perfectly acceptable, immaculately clean hotel right next door, where for about the same price, not only did we have our own bed, we had our own room with private bathroom. This turned out to be a god send when we later both came down with food poisoning, at the same time! The host even went with us and negotiated an even better rate then we could have accomplish on our own with our pigeon Spanish. She was willing to do whatever it took to make us happy.

At first AirBB refused to refund the service fee, but I pushed, didn’t ask, demanded and used terms like enhanced, false and misleading and they finally refunded the fee, also. So this one ended positively.

On to episode #2. The pictures tell the tale of this deplorable shack. I had booked for 14 days, once again based on enhanced photos and an even bigger list of lies, claiming to be the amenities. I actually didn’t believe there were the amenities listed, but hoped for a few. TV, washer, ac? give me a break- there wasn’t even a mirror on the wall! There was what looked like mold covering the shower drain, the sink was badly chipped and cracked, the beams were crumbling, the screens torn, and the kitchen dark, dreary and dirty and the cabinets indescribably gross. Once again my first clue should have been that there were no pictures of the kitchen.

I immediately changed my booking for 4 nights, instead of the 14 I had planned to stay at the beach. I should have left immediately and insisted on a refund. Yet, in my defense, I had just spent 10 hours getting there via taxi and overnight bus, I was still ill, and needed time to figure out something else for the 10 remaining days. We’re talking about the beach in January!

The host did replace the sink, the maid kind of cleaned the kitchen, and promised a mirror, but never delivered. I had booked this because it had a kitchen, but couldn’t even bring myself to go down there, let alone cook! New sink, but no water the following day! The maid did come and figure out how to get it working again. And, to his credit, the host was quick to respond and arranged for transportation from the bus to the shack, and to Puerto Escondido when I left.

I didn’t decide to insist on a full refund until I was leaving, feeling angry, traumatized and victimized. It is totally unacceptable for AirBB to be booking such decrepit shacks, passing them off with enhanced photos and lies! They need to be held responsible, and so does the host.

The host has refused my request, since I did stay there, so I have turned it over for mediation. Word so far is that it has been determined I am owed a partial refund. This was before I sent the photos! I’m insisting on a full refund, including the service fees. We will see……..

And as an aside- this is not my first rodeo. I have made 45 trips to Mexico during the past 30 years, so have a pretty good idea what I can expect for my pesos, when it comes to lodging. The shack was $40 a night and was worth about $10.

On a positive note- of the 5 properties I have stayed in on this trip, 2 were totally unacceptable, 1 ok and 2 were fantastic. I’ll just book with them directly in the future.