Upon checking into an Airbnb in LA for almost a two-week period, I had to do massive cleaning as there were dried chicken bones left in the refrigerator along with old food and mold! The bedding and towels along with dishes all had to be cleaned and washed, and the trash was full to the top and had to be taken out. This stay was horrendous and all this cleaning took place after I was forced to wait four extra hours from the scheduled check-in time. The host (Phyllis) agreed to reimburse me for a half day’s rental cost. I was told the delay at check-in was due to maid service: apparently she was busy “cleaning” the Airbnb property. This of course was not the case. All dishes were either dirty and sitting in sink or littered with dust and dirty water marks, left to sit on wire shelving. I was forced to go to the store to purchase cleaning supplies, candles, air fresheners, incense, etc. This host never reimbursed me for the half day delay at check-in – which was agreed upon – and then had the audacity to write a slanted negative review, claiming he smelled “smoke” in his freshly de-sterilized “bungalow.” I’m off to get a tetanus shot after this horrible stay. 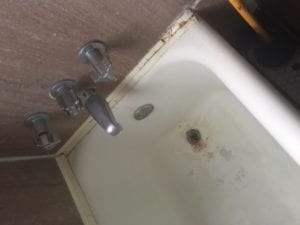 My daughter had a volleyball tournament in downtown Indianapolis in June 2016. The hotel I wanted to stay at, Crowne Plaza, where the team was staying, unfortunately was fully booked at the parent rate and a neighbor mentioned I should check out Airbnb as an option. I was surprised to find an apartment at only $100 a night about 1.5 miles from the convention center. Another mom whose daughter was also in the tournament agreed to split the fee with me and one of us would bunk on the couch since tournament days are often long with minimal time spent in the room.

My first red flag happened the night before check in. The host, Eric, asked me to give him a call when I had a moment to go over check in. At this time he revealed he wanted to be up front (nice of him to be upfront with less than 24 hours to check in…) as he had a small issue that “wasn’t a big deal” but that he wasn’t supposed to be subletting his apartment so if anyone asked who I was, to say I was a family member. That immediately made me uncomfortable as I had booked FOUR NIGHTS at his apartment. If something went wrong, what might happen? The “upfront” comment really pissed me off. There was nothing upfront about it at all. I was told last minute and not given the option if I wanted to be at risk in this way.

I called several hotels immediately but no one had any rooms available. The day of check in I contacted Eric to find out how to retrieve the keys. He had previously told me he’d have the keys available for me to pick up when ready. I wrongly assumed that meant he would leave the keys with a doorman, an apartment manager… but alas, I made an error in using common sense. What Eric sent me to show me how to retrieve the keys was a picture of the front of the apartment building where a red circle was placed on the left side of the photo indicating where I could retrieve the keys… which were hidden under one lonely slate piece of rock that stood out like a sore thumb next to the door.

I was in a rush to get my daughter to the hotel to meet the team so I rushed in, dropped off my bag, and left. I noticed the lock was difficult to handle and saw there was no metal casing where the deadbolt should sit, just wood roughly carved out that left the door closing very loosely. My friend, the mom of my daughter’s teammate, Uber’d back with me to the apartment and I showed her where the keys were left for us. She was shocked. We scurried to the apartment hoping no one was going to stop us on the way and we noticed a cubby door near the front door of the apartment. This was not mentioned in the listing, so we opened it.

The door fell off in our hands but we noticed when looking inside it looked vaguely familiar. No wonder – it led to the closet inside the apartment, which had no lock on the door, and was easily sized for someone to climb through. We pushed a chair up to the closet door for security measures. Two women in a strange city alone with a door someone could crawl through and wind up in the apartment left us feeling vulnerable and worried. Again, I called around to more hotels, and nothing was available. I went to the Airbnb site and couldn’t find an emergency phone number.

We then proceeded to look around the apartment and noticed what a sty the place was. The bathroom was disgusting! I was so grossed out I wouldn’t even brush my teeth that night because I didn’t trust the water flowing through the faucet. The shower was beyond human use but oddly enough the photos in the listing did not depict the nastiness; they were staged in a way to not show it. I had asked the host for a set of sheets for the couch since there were two guests staying. There were no extra set of sheets to be found anywhere, just a lone blanket with holes in it folded up next to a chair and a brand new thin blanket thrown on the couch, but no sheets.

The bathroom had ONE washcloth and three towels. That’s it. There was one roll of toilet paper. The floors were nasty; the edges of the entire place were thick with black grime from years of dirt and lack of scrubbing. I sat on the couch while my friend had an anxiety attack and used her inhaler. When I got up, cat hair was all over my pants (the listing did say he had two cats but I asked him to remove them because of my friend’s allergies – he insisted he cleaned the house the morning of check in for three hours – a total lie) The house smelled, just like the apartment building. I don’t mind old but I do want CLEAN. This place was old, dirty, and disgusting. I wouldn’t judge anyone if that’s what they can afford or for how they want to live but when you open up your place for others to stay at and risk their security, health, and sanity because you want to make a buck (or in this case, $400 bucks), I have a problem.

Did I mention we slept on the couch because we were too scared to sleep in the bedroom with the wonky cubby hole/door thing going on? I kept smelling something seriously rank all night and when light finally hit in the morning, I looked on the side of the couch and there were two wine bottles (which were probably not empty, by the smell). I finally was able to Google Airbnb and find a hidden phone number. I spoke to someone named Buster and uploaded tons of photos of our situation. I felt I should have been refunded the ENTIRE amount we spent. They did cancel our reservation which gave us back two nights and they proceeded to also refund the third night and our service fee.

I will never use Airbnb again. It was so stressful. We got two hours sleep total the entire night leading to the day our daughters played. Luckily my husband is a Platinum Marriott member and they were able to give us a room for the night about 15 minutes away from the convention center at a great rate. I seriously felt like I was walking into the Astoria when we got there. Coincidentally, I got a text from Eric asking “Hi, how is the stay going?” about two hours after the reservation was cancelled. I proceeded to block his number and enjoy the rest of my stay at the Marriott. Never never never again! Too risky and too much work to get a resolution. Buster was nice but I like the option of going to a front desk and speaking with a person for an immediate resolution at a hotel. Too much was left up for Airbnb to agree to despite how wrong the listing was and the security issues we faced.

I am an Airbnb Superhost with two huge houses that cost a fortune to clean, and have rented them with 5 star reviews more than 50 times in the past year and a half with stellar feedback… and suddenly, the last two months, it is as if something in the universe has shifted, and every Airbnb GUEST has realized they have the power (with their ability to complain to Airbnb and threaten you with bad reviews) to make you jump through hoops and trash your place in the process. In the last few months, more than HALF of my guests have had good reviews by hosts but turned out to be chronic complainers, scammers, and pigs. They now have the dreaded HOTEL mentality instead of guest mentality–NO respect. They break all hose rules, leave the house in shambles (especially the kitchen, you can’t believe the grease storms and dirty dishes they generate) so my cleaning costs have nearly tripled. Cum stains all over the dry-cleanable velvet comforters… you get the idea. What happened?!