I rented a lovely home in the DC area that I thought was a great deal. Unfortunately, after a late night arrival and a hot night with no AC, in the light of day I found that his property had a lot of slapstick-repaired water damage from a double shingled saving roof with additional plumbing problems. We were promised AC repairs the day we reported them within 24 hours but they never happened. Coughing and respiratory problems ensued. There were tarps on the skylights and evidence of water damage in every room including rust on baseboards which had been removed. A second verification of damage is needed to confirm this atrocity and obvious health violations for a rental. Luckily you can report to local authorities since Airbnb will do nothing but offer a partial refund and keep such a listing on their site. The following is the current listing. 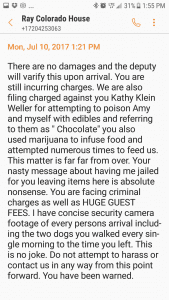