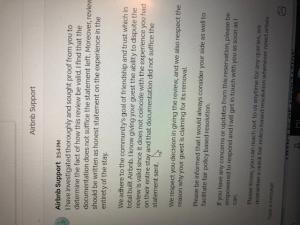 I have to share two host stories. One relates to systemic fake reviews. I recently had the most horrible guests at my house. They were incredibly messy, rude and blackmailed me to have free pool heating during their entire stay free of charge with the threat of a bad review (pool heating is about $200 per day).

Once I reviewed them, I simply stated that they were very messy and overall very difficult to deal with as I had heard that Airbnb tends to delete bad reviews based on “policy violation” and therefore didn’t want to get too factual to avoid any frivolous claim retracting my honest review (note that this was my first ever “bad” review and frankly it wasn’t even that bad).

Airbnb said that, based on a summary investigation (note: I even sent pictures of various damaged objects as well as messages from my neighbors stating how impolite and ‘obnoxious’ those guests were – I wasn’t even asking for any dollar compensation), they determined it was “fair” to delete those reviews. They stated as follows:

“We adhere to the community’s goal of friendship and trust which in total built Airbnb.”

Note that these guests were exactly the opposite. As a result, anyone can dispute any review and get it removed saying it’s not ‘friendly’ and it’s really hard to trust anyone’s reviews.

The second story happened in my New York apartment. A crazy guest claimed (after using my apartment two weeks) that my neighbors threatened to get her arrested as Airbnb is “illegal” in New York. While she had no factual evidence whatsoever and she spent her time in my apartment, she was given a full refund after the stay (at my expense since Airbnb took out the full $4,000 from my next guest’s stay without letting me know).

What this means is that, contrary to popular belief, Airbnb takes the strong stand that they are illegal in NYC and will refund anyone who makes up any similar story without evidence. So, if you are dishonest, go for it.

Over the holidays, I rented an apartment. There were problems with the maid. She basically moved into the unit with me and spent half the day there, despite me desperately trying to get her out.

After the first week, I decided to stay a second week. The host agreed. She accepted a second booking at a discounted rate. On the last day, I was accosted for money for “payment for the last five days – in cash and now” and actually attacked by the maid. I only lost about $50, but reported the incident to Airbnb as a “Trust and Safety” issue. I also complained to the host. She proceeded to defend the staff member, and told me she would lodge her own complaint with Airbnb, stating that I had tons of “unregistered” guests, and damaged the apartment… and this was after she renewed my booking.

The next day, Airbnb contacted me and asked for a police report and photos of my injuries. They said the host complained that I damaged the unit and had four “unauthorized” visits. They wanted to know if I had stayed in the apartment without checking out after the first week and stayed for the second week, as they did not see the payment. A payment was in fact made with my Visa. I had 25 photos of the apartment as well as video. The only damage was a stain on the rug, which I believe had been there for months.

The results? The host’s listing was back online in two days, and I was banned as a user. Moral of the story: be very careful when making a safety complaint about a listing. The host can retaliate against you. There is no whistle-blower protection rule. Airbnb could accept all of the host’s complaints, ignore your safety concerns, and ban you.

After deliberating at length, I’m sharing my story and advice. I planned a trip to Paris, my favorite city, to celebrate my birthday. I carefully chose an Airbnb based on reviews and location, with price being my least concern (but still looking to minimize). My host notified me via email the morning of my departure that my check-in could be two hours earlier.

My transatlantic flight, which included a layover in London, touched down just after 14:00. After claiming my luggage, getting my bearings and securing train tickets, etc., I headed to the city. Combining these activities would warrant at least a two-hour window, even if I knew the exact location already, which I did not (though after eight previous visits I know Paris somewhat).

Once off the train I texted the host again, noting I was in a cafe for a break before heading over. It was 30 degrees F and sleeting outside, and I needed to consult my map and have a quick bathroom break, unsure of just how close/far I might be. The host rang my phone immediately and was very curt, saying I was late. I knew I had been expected at a certain time, and he had been waiting for 30 minutes.

I stated that based on weather, my fatigue and (obviously) his displeasure I was happy to seek hotel refuge and regroup, to start over the following day. I had paid for six nights. He said he would not be free any other day to meet with me and pass over the keys. Following this statement to me, as I made an effort to explain my situation, he hung up. I was shocked and dismayed, so I went to a hotel.

What transpired afterwards was just more and more of my precious vacation time texting, emailing and phoning with Airbnb. To sum this up as I see it now, a hotel (even a small privately owned one), would have been available based on the demands or shortfalls in my schedule, and would have recourse for a complaint, refund or even cancellation based on my customer experience, without requiring added time and energy.

I will use Airbnb again, but strictly within the US, where there is little or no language barrier added to the experience. I did receive a portion of my fees returned, but my hotel stay far outshined and surpassed what that apartment could have offered, for the same price. Lesson learned.