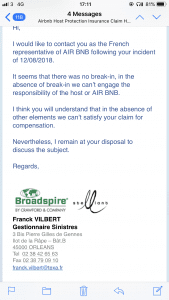 One Airbnb host, Steeve, runs a series of Airbnb apartments with his friend in Cannes. We ran into major problems with this guy when staying in one his apartments: we had over £1,000 worth of property stolen and he has repeatedly tried to cover up what happened and is not willing to help resolve the issue.

He has already duped a previous Airbnb host in the past, as shown by this review she eventually left. I tried to leave a review with Airbnb but the host obviously is able to manipulate them into siding with him.

On August 12th, we left the apartment around 12:00 PM and returned at around 9:00 PM. However, after starting to pack up the apartment, we realised two very expensive and rare pairs of our designer shoes went missing, worth in excess of 1,000 euros. We definitely had the shoes there before we left that day. After that, all three of us­ rechecked the whole apartment three times each, and definitely couldn’t find them.

We called the host and asked if anyone had been in the apartment. He said nobody had, and he would not accept that anyone could have stolen it or entered the apartment and continually said “it’s impossible” and that they “must be in the apartment”. He then came in person, and checked with us, and of course, failed to find them there.

The host just would not accept that someone could have stolen it, claiming that his workers are trustworthy and that nobody else has access to the keys. However, he contradicted himself here as on August 8th he asked if his cleaner could come into the house to clean while we were away. They actually did not turn up and he remarked to me later that day that he then “had to get the keys off her”.

The host was adamant that nobody could have accessed the flat but then could not explain how shoes could have gone missing. He also implied that perhaps we hid the shoes, or were lying. I feel this Airbnb host was unprofessional, missing the point and defensive, as he also made remarks like “extraterrestials must have taken them” and “who would steal just shoes?”

The fact still remains that: we were reporting our property being stolen under his watch; a crime had been committed; and it must have occurred within an eight-hour time period by somebody coming into the apartment. It is extremely curious as there were absolutely no signs of any forced entry, door damage, window damage or damages to the locks of the door, meaning the thief must have entered using a key. This should be great cause of alarm for the safety of future guests.

The host also seemed very nervous and hesitant of getting law enforcement involved in any way. Instead of saying “No, Airbnb should sort it,” a friend of the host’s came to visit the flat on August 12th just before 11:00 AM to pick up a baby pram/bed. He was checking each room as if he was struggling to find it. We were with him the whole time, but found it curious how he was scanning the entire flat.

The host phoned the cleaner and his friend, ­­­on loudspeaker in front of us. All that was asked was “do you have a key for the apartment?” to which his friend said “no”. However, the cleaner seemed very hesitant and confused about whether she had one or not. The host was defensive of her, and did not accept that it was possible that she would have done anything.

We were the victims in all of this, having £1,000+ worth of goods missing. Our host was not very considerate, blamed us for this, and acted as if he was the victim.

We are currently filing a report with the French police to investigate this. However, it is difficult as I’m trying to do this from the UK. Please share this with as many people as you can on social media, so that nobody else can get scammed by this dishonest person. I’d also argue that if someone was able to be so dishonest and callous with their tenants, you would also not want to engage with them in any business.

I got an email from someone pretending to be Airbnb, basically threatening me! (Photo below)