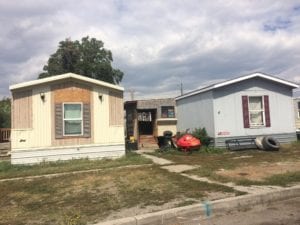 Our story begins like so many, an innocent Airbnber looking for a place to stay for our six-month working holiday. We made arrangements for what seemed to be a charming cottage with three bedrooms. We are a family of five with a one year old, so having an entire home with three bedrooms appealed to us. Upon our arrival, things weren’t quite so charming. The cottage was more of a hovel. What appeared to be shabby chic online was just shabby. The neighborhood was full of overflowing dumpsters and dilapidated homes and trailers. Everything was padlocked so we were nervous about safety, both personally and for our property. The rental had been advertised as historic and an easy walk to downtown. Unfortunately this walk was in the aforementioned neighborhood, full of traffic, and lacking sidewalks. We were also without Internet, which had been supposedly included. The gas stove was leaky and the smell permeated the utility room as well. The fourth night there the toilet overflowed.

We notified the landlords but an hour later when we heard back I’d fixed it and cleaned the floor. Unfortunately wetness kept seeping up from the floor, which was disgusting. Because the shower floor was spongy we wondered if perhaps the entire bathroom subfloor was rotten? The biggest concern to us wasn’t actually these things (though they did suck). The biggest issue was that the stairs couldn’t be adequately protected for our baby. We notified the landlords about our concerns at the first opportunity available. They were unresponsive and said if we moved out they’d keep our first and last month’s rent and deposit, totaling $4200. We tried to negotiate by paying them a higher daily rate by moving early but they weren’t willing to be flexible. Mind you, we had not signed a lease and the place wasn’t safe! We moved to a hotel and got an email saying they’d contacted an attorney and had property damage from us. Also, they knew we had a cat there because of all the black fur. We don’t have a cat! So now, while I’m sure they can’t do anything to us legally, there’s a definite shadow over what was meant to have been a magical family adventure.