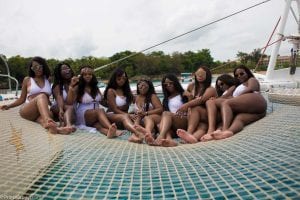 My friends and I went to Puerto Plata in the Dominican Republic on June 10-19, 2017. During our stay we had a couple issues: the grill not turning on, the fridge spoiling our food because it was not working. We booked an ATV riding experience and paid in cash on the spot because we wanted no surprises; some reviews stated the host had extorted money from guests for similar tours. We told them we had booked a catamaran with another company and they seemed a bit upset.

The next day we were told the catamaran company would pick us up at 8:45 AM. He said the company told him that; we were a bit confused by this because we had an email saying it was an 8:00 AM pickup. We thought maybe they worked together. We went on the catamaran. It wasn’t what we expected; it was boring, and even the best parts were mediocre.

After getting back we were then told the hosts had taken us on their catamaran (not the one we had booked) and they knew how to cancel our original PayPal transaction; they insisted we should send them the money after the tour. We were confused how they could do such a thing without our permission. They put it in a claim with the other company, saying they had come and taken us.

The next day the workers came again, telling us to pay $100 more then what we paid with our original plan. We told them PayPal had not given us our money back yet, and we would do it as soon as the money was received.

We left the 18th at night. One of our friend’s flight was later on in the day so she stayed. The host would not let her leave, brought security saying she couldn’t leave and the police were on the way. A guy friend of ours was in the same villa so he gave the host $350 and she charged the credit card that was on hold for $500 and the Airbnb account $720 in order to let our friend go.

We called the original company that we booked. They notified us they came and the host had said we didn’t want to go with them. We were also told they don’t issue refunds, so we payed for two catamarans. This host is a fraud and must be stopped. How can she live with herself, extorting people? She made a few thousand off of us for the Airbnb and extorted us for more. She told us a pickup time of 8:45 because we told her the pick up was at 8:00 AM. The company couldn’t reach us with all the security and they wouldn’t have waited 45 minutes. She set us up so we didn’t know we were on her catamaran.