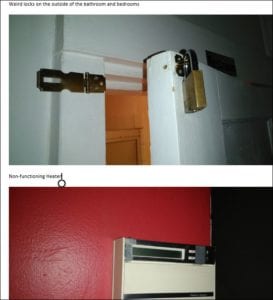 We were a group of seven adults trying to get up north for a close friend’s birthday and it didn’t turn as great as we wish it had. The first weird moment was when I got a text from the host telling me the hot tub was on, and if we were going to use it, it would cost $50 for utilities and a cleaning fee, when the hot tub had already been included in the listing. Who would want to jump in a hot tub outside in the Oakland/Montclair area in February while it’s pouring rain? We arrived there to find out that none of the “entrance doors” we going to be locked during our three-night stay. The host told us it was a really safe neighborhood and that he was a part of the “neighbor safety watch council.” We obviously had luggage as we had booked from Friday to Monday morning, so we were a bit skeptical by this news that had just fallen on us. After getting some of our belonging in the rooms, we noticed some of the beds were in fact only mattresses on the floor, which was different than those in the pictures on the listing. Some of the rooms had a really dusty/stuffy/moldy smell and it made it awkward to breathe, so we opened the windows a bit, even if it was pretty cold up there.

We all went out to the birthday boy’s dinner, to find out after coming back that the kitchen counter was not even clean. Why would they rent a dirty house to people? When adding some beverages to the fridge, we realized that the entire place was just dirty. Two of the rooms had a space heater, but the third one had nothing. The people staying in there were freezing during the night and tried to turn what seemed to be the “full house heater” on the next day, but the box didn’t even work. When it came time to take a shower, we realized that not only was there rust, the towels were falling apart, the rod used for the curtain was actually a metal pipe, and the bathtub was actually moldy all over. The listing showed a $75 cleaning fee. I’m not sure who is enjoying that charge, but definitely no one who ever touched a sponge, scrubber or any cleaning detergents.

The house all around was really mismatched and decorated in a really weird way, but what was shocking is the fact that only a homemade sliding door was separating our “entire place” booking and where the host lived with his girlfriend. If the door was closed and locked all the time, it would have been ok, but in our case, we found that door wide open every morning, after a few of us had already left. The host might have thought it was cool to just go around during our “rental time” without letting us know. He could have at least warned us. Also, please read the “Hot Tub Rules” that were listed on the side of the dirty fridge, and tell me if you believe this is okay to ask your guest to be completely naked to use the jacuzzi. There is so much more I could say about our stay, but I’ll just share the few pictures I took of that place that should not be on Airbnb before getting cleaned and updated.

I requested a part of our booking fee back from all the people who rented that place with me and didn’t get any answer. I believe that rust, mold and unlocked entrances at all times should not be a part of the Airbnb policy. The nonexistent customer service pretty much tells people like us, to resolve the issue with the host and would get involved only at the crucial part. I feel like it is a great business for them as they are charging quite a bit extra to the guest and take a nice part of what the host makes as well, just for the access to their website. For all the money they are taking away, I wish they would support whoever goes through that kind of experience a little better. Hopefully someone will get back to us and at least get us the cleaning fee and Airbnb fees back.