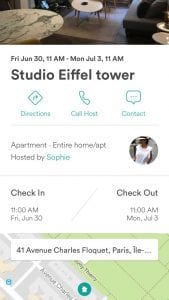 I returned from my trip to France and Germany about a week ago. For the first time I decided to try Airbnb. My boyfriend and I had used it several times during vacation in the US under his account, and never had an issue. Then, I opened my own account this time to give it a try. Apparently, the review system is a hot mess. I received at least ten emails reminding me to write a review upon returning home. Quite frankly, I had such a bad experience I thought I should just not review it at all: a situation where if you don’t have anything good to say, don’t say it at all.

However, I went ahead and wrote a review with the positive aspects of the place, which in reality was a bargain for the location. When I read the host’s review, I found he had given me one star, saying that I was not pleasant, and that I was rude. I was shocked to read those words because I barely exchanged a word with him during my stay in the place, and when we left, he was all giggles and smiles with my boyfriend. It took a lot from me not to tell him what I was thinking about his demeanor.

I am a straightforward person. When things are not good anymore, I just remain silent. I cannot fake being happy with a situation if I am not. This man was the king of fake; in fact, that was the whole issue. He pretended to be okay, and he faked being accommodating. He stressed us so much, and he basically ruined our romantic weekend.

I travel to Paris regularly, and normally use Booking.com or TripAdvisor (and believe me, I do regret not using those for this trip as well). My suspicions of making a mistake started when just a couple of days prior to the trip I did not hear anything from my host. I proceeded to message “her” through the app to arrange our meeting. To my surprise, I was contacted by a man. He replied to my message the day before my trip excusing himself already for replying late (first picture). I was wondering why the listed female host was not responding, but I figured this person was somehow related to her. I did not think much of it, and he requested we use WhatsApp to communicate. I agreed to it, but I assumed he did not have a clue about how cell phones work, because my American phone would only work in wifi friendly areas in France.

We originally sat up a time of 6:00 PM to meet at the place, but as soon as I landed in CDG, I received a message from my boyfriend who was flying from Germany to join me on the weekend trip, telling me Eurowings had a delay of an hour, and we would need to change the check-in time. I did that right away: contacted the host to let him know we would be arriving an hour later than arranged due to a situation beyond my control (second picture). His response to me was the following “Umm, okay – is there any chance you can come beforehand? The apartment is all ready to go and I have the keys. But I do have other plans tonight and had arranged around 6:00 PM.”

Who in their right mind would ask a woman that just traveled eight hours to come and meet beforehand with a male host (not the listed female host), and leave her boyfriend hanging in the airport? Thanks to some miracle, we both arrived at the place at 6:45 PM. At this point my boyfriend, who happens to have a European cellphone, was in constant contact with the host (fifth picture). He was pretending to be cool with the situation, but stressed us out so much by telling us he had to go due to his prior social plans. I had offered to meet him in another part of the city to pick up the keys since I mentioned I was familiar with Paris in my precious texts. He said it was no big deal, and that he would wait.

He was not accommodating at all. When we arrived, I was very tired, and disappointed at him for harassing us. I was very quiet and short. Before he left, I asked, when should we check out, to which he verbally responded: “We will sort it out. I will contact you guys.”

My boyfriend had mentioned at that point that we would like to leave around 1:30 PM because we had bags, and we wanted to go straight to the airport. He said that would work, and still he would contact us. The day before we left, there was no check-out information (sixth picture). It was around 7:21 PM when I told my boyfriend to contact the host since we had not heard from him at all. We had thought that the check-out time would be sometime around 1:30 PM, per our conversation.

Sadly, once again, this host was trying to pull a fast one bullying us. He said that we needed to be checked out by 10:00 AM because he had another person coming in at 11:00 AM. My boyfriend and I went back to the Airbnb website and looked at the listed times for check-in and check-out. “Sophie”, the host we never laid eyes on, listed 11:00 AM for checking out. My boyfriend pointed this out very politely to him, saying we would be ready at that time, as it was indicated in their Airbnb listing (eighth picture).

If you go to the property’s link now, that he has skillfully changed the check out time to 10:00 AM. Thank god for cell phones and the ability to take screen shots. At that point, we thought things were cool, and I actually prepared to leave the place in excellent condition. He failed to mention this in his very objective review. When he arrived in the morning, he was all smiles, and frankly, by then I was extremely dissatisfied with the whole experience. I avoided eye contact with him, and exited as soon as I was able to. However, he made small chat with my boyfriend and walked us out. It occurred to me he was so fake because he was there with the next host.

I forgot to mention he was late once again. Seems like that is his MO. But god forbid someone has a delay in flights that might interfere with his dinner plans. I do not understand what he meant in his review when he is talking about me being unpleasant and rude when he tried to bully us, and he failed at hosting. I am a psychotherapist, and it occurred to me that he might need a psychological evaluation.

I hoped to get a hold of the famous “Sophie” host. I sent a message through Airbnb, but of course Sophie is just a front, because the truth is this guy was in charge of the listing. As for the place, it looked like a storage room that had been conditioned for the sole purpose of renting it. There was no electrical outlet in the bathroom, so I did my hair with my hair iron plugged in the living room. The “bed” was an ungodly uncomfortable couch, and there was no temperature control in the room at all. The electrical breakers for the whole building are in the apartment, and there is no smoke detector alarm.

I hope people thinking about renting this place read my review. I am a world traveler, and have never had such an unpleasant experience. I guess that is what I get for using Airbnb. I should have stayed with Booking.com or TripAdvisor, which I will do for my next trip. I sure hope my next journey to Paris is more pleasant, and erases this terrible experience. Maybe my story will save you some heartache, and aggravation. I hope you don’t have to deal with this man.