Last week we completed a nearly two-week Airbnb stay in Los Angeles. It was not good. There were ants in the bedroom and bathroom which were discovered in the first hour of arrival. Our host helpfully offered the upstairs accommodation instead (normally more expensive, but it was offered at the same price). We were grateful even as we noted that it had the same bug problem on a smaller scale.

The host responded the next day with ant bait traps and spray. We put the ant traps in the affected bathroom and bedroom and this confined the problem to those areas. Our group of five adjusted and moved into two bedrooms instead of the three and used one bathroom since the other had the bug problem, All was manageable and though it was disappointing, they were just ants. One can live with inconvenience.

However, on the last couple of days the ants moved into our beds. At 7:30 PM of the last night of our stay we texted the host that we had to camp in the living room since there were ants in our bed. Incredibly enough, there was no response.

A few hours later after 10:00 PM, I texted the host again. No response. Nor has there been any response, gesture, refund or apology since then.

I contacted Airbnb. I provided photos of the ants and a screenshot of my messages with host about the ants. The process with Airbnb had an investigative tone (somewhat tolerable and understandable) until the representative said that in order to really move the needle I needed to have taken photos the very first moment I communicated with the host on hour one of day one.

This seemed an excessive of burden of proof to require when nothing adversarial had even taken place. He also seemed to convey from the host that we attracted the ants in the first place or later. This felt punitive and demoralizing. It felt like a lot was required to back up a reasonable claim: refund the money for the last night because we had to leave the bedroom and maybe a small gesture in addition. We would have been okay with that.

Instead, what we got was a torturous, rigid and righteous reading of the rules as though it were the Magna Carta or the constitution of Airbnb. The offer of $126 (half of one night’s stay) was completely lacking in imagination and compassionate identification with the renter. It were as though I had to prove (even after photos were produced and messages sent) that we hadn’t fabricated a claim. To get what? One full night credit?

The prospect of writing a review is not only unappealing but unfair to the host and disconnected from reality. The host has medium sized business staging properties and manages them for Airbnb renters in southern California. What good is a single review against a conglomerate of Airbnb and its multi-property host?

I feel like David against Goliath. I simply want the respect entitled to someone who came to Airbnb in good faith with the presumption of a lodging where every night of your stay you can sleep in your bed. 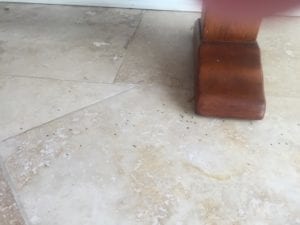